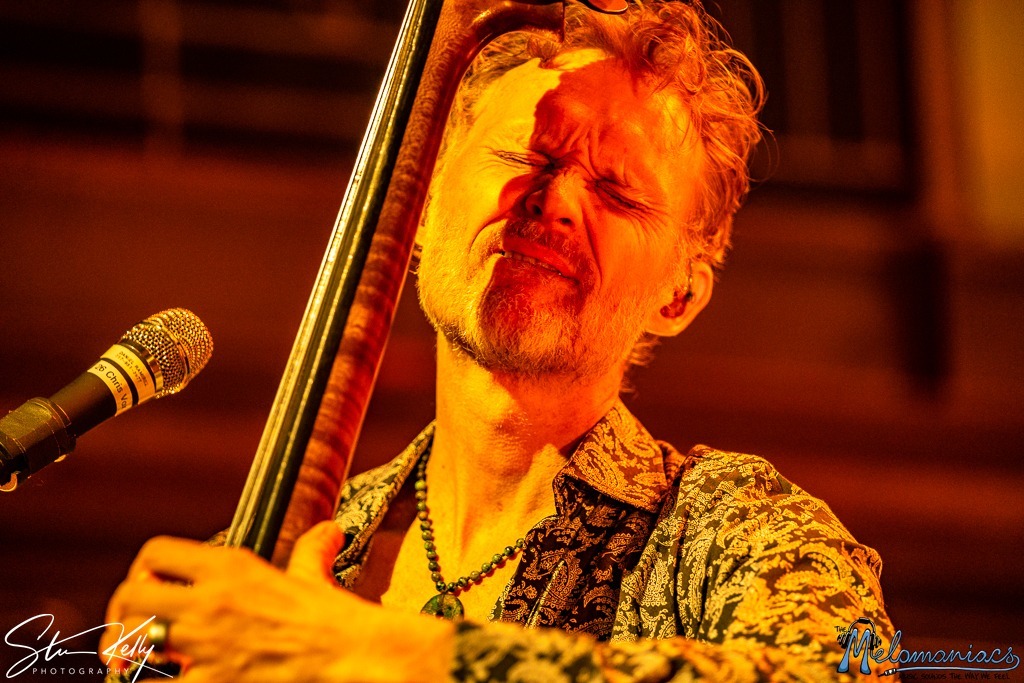 David Wax Museum and The Wood Brothers came together and treated fans to a breathtaking evening of incredible music at Washington, DC’s most beloved venue. This particular bill came together with the utmost spontaneity, as most good things usually do, when David Wax Museum got the call the night before the gig, on January 25, asking if they were available to open for The Wood Brothers at the 9:30 Club the following night.

The Charlottesville natives didn’t think twice about picking up their gear and making the quick drive up to the nation’s capital. DWM is composed of the awe-inspiring husband/wife duo David Wax and Suz Slezak. Wax and Slezak are each overflowing with musical talent individually in their own regard. They both have beautiful singing voices and they’re both multi-instrumentalists with a strong ability to juggle musical responsibilities of any magnitude. It gets even more special when you put them together. The stars certainly aligned when these two met, fell in love, and became musical partners. A simple smile, or when they made eye contact, spoke volumes between the two on stage without ever needing to speak a word to each other.

Together David and Suz are operating at a level reminiscent of June Carter and Johnny Cash, especially the way their love for each other pours through the music and radiates on stage. The band certainly won over the crowd early and often. DWM stuck to their heavy hitters like “Every Time Katie,” “Big Sur” and “Guesthouse” before Suz performed the title track from her new solo album Beautiful Mess. The couple concluded their set with a gorgeous duet on the Grateful Dead‘s “If I Had The World To Give.” David Wax Museum was all class on stage, thanking the audience and the venue several times. They certainly gained a new set of fans after such an incredible performance.

During the changeover, the house music set the mood for the rest of the evening that was about to unfold. Songs like Marcos Valle‘s “Mentira (Chega De Mentira)” and Willie Bobo‘s “Fried Neck Bones And Home Fries” were just a few numbers that kept the crowd entertained before The Wood Brothers took over. Once The Wood Brothers came out they wasted no time and opened up with the three-song punch of “Fall Too Fast” > “Mary Anna” > “Alabaster” which was more than well-received by the audience.

“As locals, you may not be aware of just how many people in our industry love coming here [to the 9:30 Club],” said Oliver Wood as he professed his adoration for the venue from the stage. “From the shirts to the cupcakes, to the friendly staff, there’s not a bad seat in the house. So make sure you support it. That being said, we might be out of cupcakes (laughs).”

The Wood Brothers made a conscious effort to cull from their extensive catalog throughout the show, from 2006’s Ways Not To Lose to 2020’s Kingdom in My Mind and everything in-between. During “The Muse” drummer/keyboardist Jano Rix joined brothers Oliver and Chris at the skirt of the stage with his acoustic guitar and his melodica in toe. Rix shined consistently throughout the show, whether he was providing vocal harmonies, playing his melodica, using his acoustic guitar as a percussion instrument in an exotic format, or keeping impeccable timing behind the kit while simultaneously playing an electric keyboard, it truly seemed like there was nothing he couldn’t do to contribute to the music. It’s easy to be captivated by Oliver and Chris’ chemistry as family members, but Rix is an important anchor for the band who lays a meticulous foundation for the other two to build off of.

During “Little Bit Broken” the energy combusted into a beautiful sing-a-long between the audience and the band, the first of many that would happen effortlessly throughout the show. This particular instance felt like something eerily similar to the classic call-and-response ensemble of a congregation. Chris Wood also flexed his music proficiency during “Losin’ Streak” when he broke out his harmonica and managed to squeeze in a playful tease of War‘s classic “Low Rider.” Chris was having a lot of fun on stage, often dancing, interacting with fans in the front row, showcasing his chops on the standup bass with a bow, and genuinely letting himself get lost in the music organically. It was clear through each giant smile that he was more than happy to be on stage doing what he loved.

“Postcards From Hell” received the loudest crowd reaction throughout the night and there’s a reason it’s one of the band’s most celebrated numbers. Oliver Wood’s vocals excelled on this particular version and it truly was a beautiful moment to feel the energy of the crowd fully locked in appreciating every note. For “Sing About It” and the traditional number “Little Liza Jane” the band reprised their unorthodox formation at the skirt of the stage, this time all three band members were huddled around a classic style microphone (the type that inspired bobbing and weaving between old-time Appalachian bluegrass bands).

Before “Little Blue” Oliver dedicated the song to Jeff Bezos and Elon Musk, a tongue-in-cheek reference to their recent space travel, which is fitting for the love song which pays homage to our home planet. The trio concluded their set with a tender version of “Luckiest Man” where Oliver coaxed the crowd into another sing-a-long session. After a quick encore break, the band returned for “Happiness Jones” and “Honey Jar” capping off an incredible evening of music that brought a lot of joy to an otherwise bleak winter Wednesday evening. Oliver Wood left us with some heartfelt parting advice:

“I want to wish y’all a happy new year, take care of each other.”

The short but sweet sentiment resonated profoundly. The Wood Brothers are currently in the midst of their Northeast tour, with tour dates officially announced through the summer. Be sure to catch this incredible band on the road for a unique blend of soulful Americana folk music.