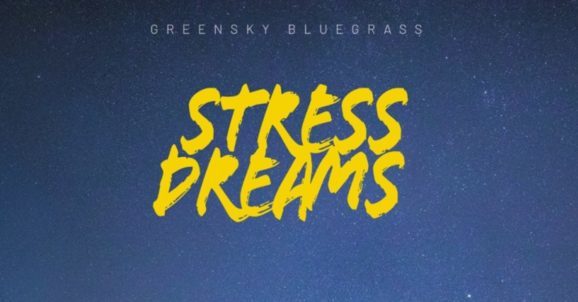 Greensky Bluegrass released their eighth studio album yesterday titled Stress Dreams via Thirty Tigers. With this new studio release, the Kalamazoo quintet has once again proven why they’ve been praised as one of the premier songwriters in the modern “jam-grass” sub-genre. The new tunes touch on a wide spectrum of emotions, many of which feel like a volcanic release after navigating through a global pandemic, especially since any sense of normalcy is still being met with a giant question mark.

Stress Dreams is chalked full of many characteristics even casual fans of GSBG have come to expect; beautifully written pensive lyrics, sharp flat-picking, harmonies that blend effortlessly, extended studio cuts which serve as launching pads for deep improvisation in a live setting, and their trademark approach of injecting a fresh sense of rock and roll into the sacred genre of bluegrass.

A few common themes immediately stand out on the album upon first listen. The first is authenticity. The idea of searching for something real, allowing one’s self to feel something real, or surrendering to the notion that the only true common ground we have is trying to view the world through a lens of veracity. For example, in “Get Sad” Paul Hoffman professes “No one crumbles under the weight of their happiness / They can’t see the point in living on in such contentment / No one sits alone, tired eyes out of focus / Dwelling on the hopelessness they’ve never had to face / You really want to feel? Get sad / You really want to feel? Get sad.”

The melancholy undertones don’t detract from the message of authenticity. Those same messages can be felt through “Screams” where Hoffman declares “I’m filling up on your emptiness / I feed myself with your pain / It’s what I need to rise again today / It’s the greed on which I lean / I starve to prove that I heal / Confirming all of my fears / I need your screams in my ears / Something real I can feel.”

The other common theme from the album is dependability. Specifically the dependability through a romantic partner and the need to share intimacy with that person. It’s not uncommon for the band to write love songs, but the themes of love feel different on this album. Mike Devol penned “New & Improved” as an outlet to confess his love all over again. The lyrics “How can I help you see? / My newfound maturity / Isn’t the same old bullshit, how could it be? / The truth is you haven’t been wrong / Been hard pressed to say it / And it took me so long / I’ve got a whole new kind of love for you / Like you’ve never seen before” feel like a ceremonial renewal of his vows.

Another clear-cut example is one of the strongest tracks on the new album titled “Grow Together.” Hoffman paints a picture of a couple navigating the ebbs and flows of a two-way street in a relationship where the goal is still to grow old together. The idea is that as much as we try to protect our partner from the darkness in the world, the only shining light is living a full life and growing old together. The chorus chimes “No matter how far we’ve come / Still the same thing on my mind / That we can grow old together / If we can find the time.”

The new album is a beautiful new chapter from a band who’s story continues to be written. The heightened sense of maturity, authenticity, emotional vulnerability, and sheer passion radiate prominently through the new music. What Greensky Bluegrass has been able to achieve together truly is special. Stress Dreams is that swift reminder that we’re lucky to have them.