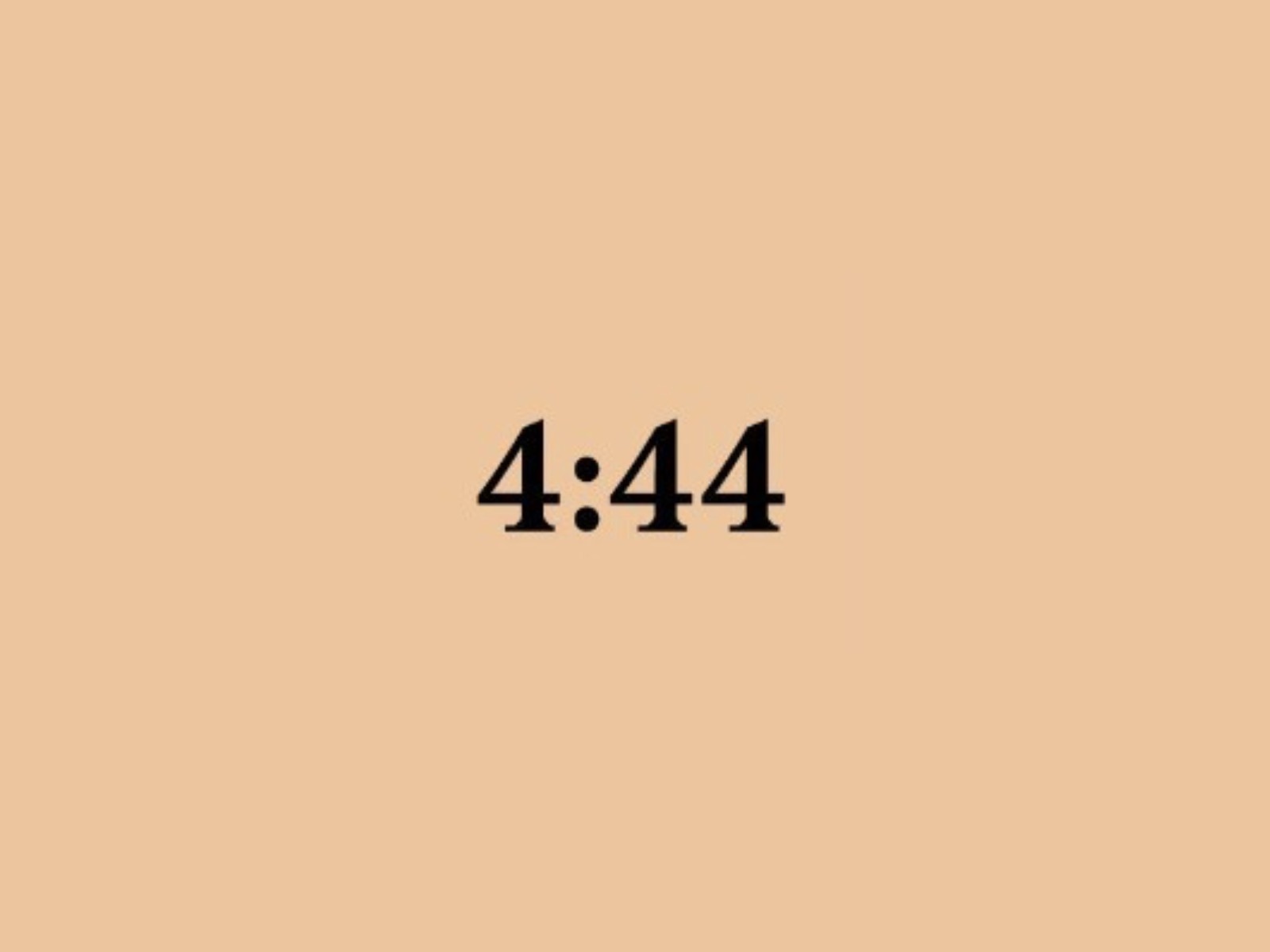 The title track, a deeply moving apology to his wife, came to JAY-Z in a dream. When he suddenly awoke, at 4:44 in the morning, he wrote the song in its entirety and chose to go on to name the full album after the palindrome timestamp.

JAY has returned to dominate hip-hop with his 13th studio album 4:44. When JAY drops a new album, the entire hip-hop community stops to see what he does. While JAY has no problem achieving commercial success, his last two studio efforts have failed to achieve the critical success of some of the juggernauts on his resume like The Black Album, The Blueprint and even his debut album Reasonable Doubt. However, 4:44 showcases a new side of JAY-Z that we rarely ever see, a pure and honest confessional of some of the biggest hurdles in his personal life, some of which nearly cost him his marriage. JAY-Z is propelled by honesty and at the most monumental times on the new album, we see the artist step away from the “Hov” persona and fully embody himself as he truly is: Shawn Carter.

JAY addresses the rumors of infidelity while still making his new studio release so much more than just a tabloid response to Beyoncé’s Lemonade. Together the Carter’s have no doubt dominated pop and hip-hop culture for decades and more importantly they’re widely responsible for fusing the two together. To see them continue this trajectory, while deeply opening up their personal lives, is a new level of artistic liberty we’re just not used to witnessing at the scale.

The new studio effort clocks in at just over a half hour but not a second is wasted. The end result is a beautiful, well-constructed long apology laced with melancholy undertones. JAY sheds light on many different current affairs including race, our political climate and sexuality when his mother Gloria Carter comes out as homosexual on “Smile.”

4:44 opens up with one of the strongest songs on the album, “Kill Jay Z.” The title is no doubt a nod to JAY’s official spelling change that was announced well before the album came out (for those of you not keeping track at home, that now makes three total names changes Jay-Z > Jay Z > JAY-Z). The opening track is packed full of subtle attacks and controversy. Most notably is JAY’s response to Kanye West’s public outbursts during his 2016 Saint Pablo tour in which West stopped his show in Sacramento and demand that JAY-Z start “returning my phone calls” and that he knew JAY “had killers.” The two artists allegedly got in a dispute of money owed to West through Tidal, JAY’s streaming service. On “Kill JAY-Z” we hear JAY’s response with a subtle but impactful clap back with “You dropped outta school, you lost your principles / I know people backstab you, I feel bad too / But this fuck everybody attitude ain’t natural.” JAY goes on to add another jab int he song with “But you ain’t the same, this ain’t KumbaYe / But you got hurt because you think KumbaYe / You gave him 20 million without thinkin’ / He gave you 20 minutes on stage, fuck was he thinkin’? / ‘Fuck wrong with everybody?’ is what you sayin’, / But if everybody’s crazy, you’re the one that’s insane.”

“The Story of O.J.” addresses race in our society and reminds us that the issue is still very much relevant. The underlying theme for the song is inspired by a famous quote O.J. Simpson made at the height of his fame and popularity. In an effort to fit in with a predominantly white culture in Calabasas, California Simpson professed “I’m not black, I’m O.J.” In the song, JAY addresses the quote and shrugs it off with sarcasm “ok.” While Gloria Carter deserves the spotlight on “Smile,” the track does feature some signature rapid-fire spitting from JAY over a soft beat from a drum machine. The track is a gorgeous celebration of freedom and being true to oneself. “Caught Their Eyes” features Frank Ocean and features some more controversial topics, including the passing of Prince and how poorly his estate handled ownership after the iconic artist’s abrupt passing in 2016. In the track, JAY raps “I sat down with Prince eye-to-eye / he told me his wishes before he died / [Former Prince estate attorney] L. Londell McMillan must be color blind / Only see green from those purple eyes … You greedy bastards sold tickets to walk through his house / I’m surprised you didn’t auction off the casket.”

The title track is no doubt the crux of the album, an incredibly poignant pillar that lays the foundation for the theme of the accompanying tracks. The song speaks volumes of maturity, painting the picture of a man who’s grown to put his family before himself and fully accepts responsibility of his previous mistakes. Simply reading the opening verses one can still feel the poetry.

Look, I apologize, often womanize
Took for my child to be born, see through a woman’s eyes
Took for these natural twins to believe in miracles
Took me too long for this song, I don’t deserve you
I harassed you out in Paris
“Please come back to Rome,” you make it home
We talked for hours when you were on tour
“Please pick up the phone, pick up the phone!”
I said: “Don’t embarrass me,” instead of “Be mine”
That was my proposal for us to go steady
That was your 21st birthday
You matured faster than me, I wasn’t ready
So I apologize
I seen the innocence leave your eyes
I still mourn this death.

“Family Feud” is about the separation inside culture, most notably talking about old-school hip-hop artist having beef with new age artists. No I.D., who produced the album, flips a vocal sample from “Ha Ya” by gospel legends the Clark Sisters and then Beyoncé interpolates the sample in real-time. Her entrance arrives when Jay-Z raps, “What’s better than one billionaire? Two/Especially if they from the same hue as you.” “Bam” features Damian Marley and is easily the banger on the album. The song shifts away from the album’s vibe and in the beginning of the track JAY announces “fuck all this pretty Shawn Carter shit, ni**er Hov!” JAY references his late friend The Notorious B.I.G. many times on the album but one of his most subtle references comes during “Bam” when JAY says “Y’all be talkin’ crazy under them IG pictures, so when you get to hell tell ’em Blanco sent you,” a reference to BIG’s line from “Ni**as Bleed.”

“Moonlight” draws its name from the Oscars’ Best Picture mix-up last year: “We stuck in La La Land / Even if we win, we gonna lose” JAY says on the track. The track is addressing how little JAY cares about his competitors and how his focus is solely based on himself and his family. “Marcy Me” is a hat tip to JAY’s early years claiming “the streets are my artery.” The title comes as a tribute to Bed-Stuy, Brooklyn’s Marcy Houses where JAY grew up. Of course there’s plenty of references to cooking coke in kitchens. The album wraps up with “Legacy” and features his eldest child Blue Ivy asking “daddy, what’s a will?” The song is about JAY’s plan to pass his fortune down to future generations of Carter’s. In the song he says “generational wealth that’s the key / My parents aint have shit so that shit started with me.” JAY also directly speaks to his oldest daughter “My stake in RocNation should go to you/Leave a piece for your siblings to give to their children, too.”

Overall, this is one of JAY-Z’s best albums and should absolutely be considered in his top four greatest albums in his lustrous career that extends over thirteen albums. From selling CD’s out of his car to winning 21 Grammy’s and selling over 100 million albums, JAY-Z is no doubt the rare specimen of a juggernaut we rarely see in the hip-hop community.