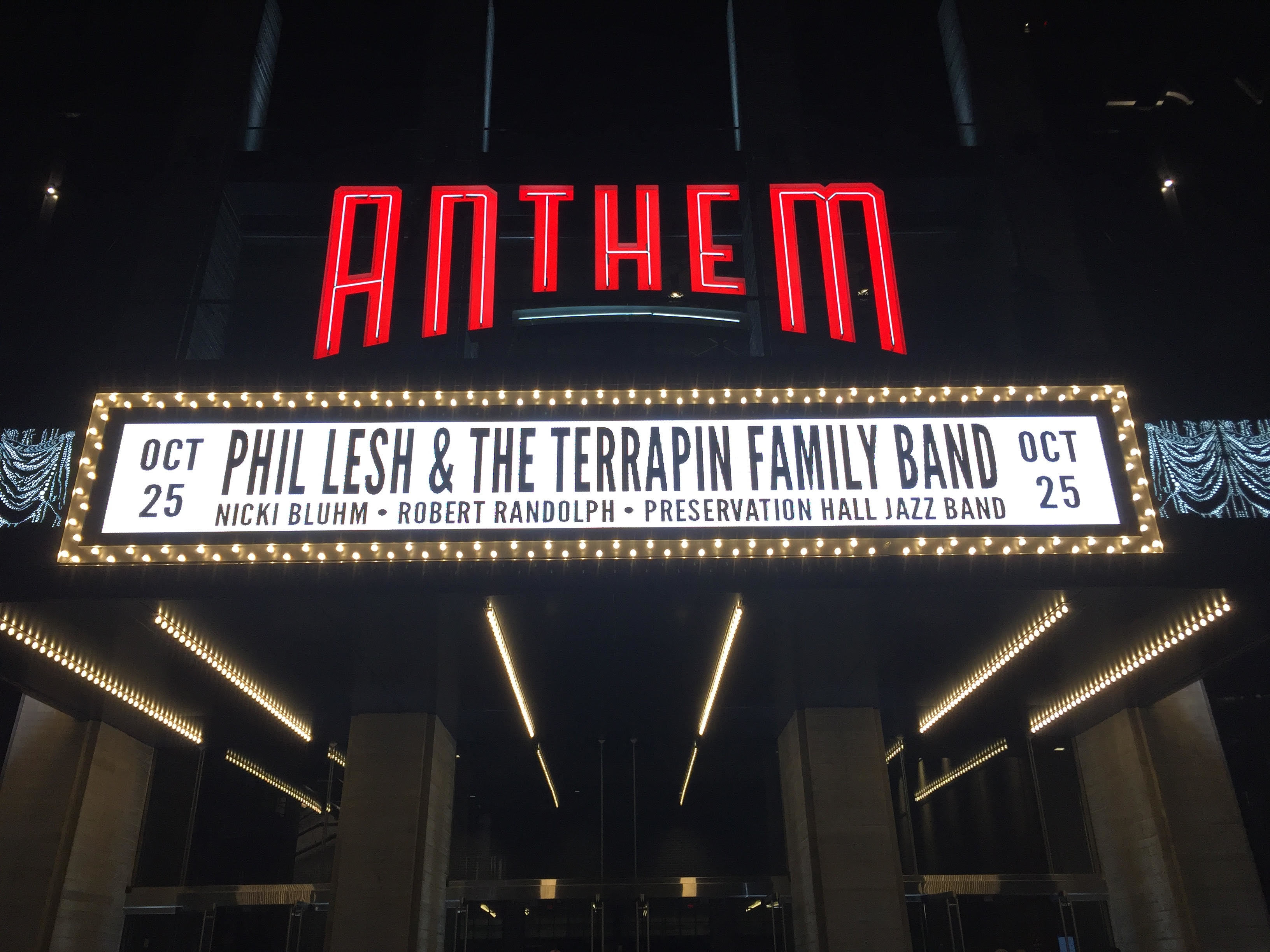 Prior to the show, the Wharf turned into its own sort of “Shakedown Street,” as Deadheads and hippies enjoyed fine dining and drinks at the riverfront development’s upscale restaurants and bars, sitting at their tables in hemp ponchos and tie-dye shirts alongside patrons in suits and ties. Fans took their time getting to the venue, with Preservation Hall confusingly billed as a could-be-opener, but the Grateful Dead’s founding bassist took the stage just a few minutes after the scheduled show time of 7:30 p.m.

Along with Lesh, the Terrapin Family Band, made up of Phil’s son Grahame Lesh on guitar and vocals, Alex Koford on drums, Ross James on guitar, and Jason Crosby on keyboards, and special guests, vocalist Nicki Bluhm and pedal-steel master Robert Randolph, launched into “Mason’s Children,” in front of a very thin crowd and empty floor. The jam that develops gives Robert Randolph an early chance to leave his mark on the band’s sound, and he delivers bluesy psychedelia and a screeching solo, at times evoking David Gilmour of Pink Floyd, and Keith Richards’ solo on the Rolling Stones classic “Can’t You Hear Me Knockin’?” Not to be forgotten, James plays an outstanding guitar solo and shows great interplay with Crosby on keys.

The first set immediately mellows out with Jerry Garcia’s “They Love Each Other” and a cover of Robbie Robertson’s “Broken Arrow” featuring Phil Lesh on lead vocals. Then, Randolph moved to a second pedal steel and played an extended introduction to the Smokey Robinson classic “I Second that Emotion,” which allowed the band to spotlight Nicki Bluhm’s fantastic voice in the lead role. Grahame Lesh took an extended solo before giving the reins to Randolph who, along with Crosby accompanying on the Hammond Organ, brought the song to a tremendous peak.

By now, the General Admission floor at the Anthem has filled almost all the way to the back and the crowd contributes to the band’s energy as they transition into “Passenger.” This is the tune where the energy in the room truly begins to climb, with perhaps Robert Randolph’s best work of the night. Randolph, you can tell, is feeling it and kicking the air as he shreds through the Grateful Dead classic. The final highlight of the set came in the form of “Bertha,” which pitted Crosby and Randolph against one another as each took turns at nailing the most inventive and intriguing guitar fills of the evening.

The band returned after a short set-break, this time with the full horn section of the Preservation Hall Jazz Band (PHJB) in tow. Now equipped with a saxophone, trumpet, trombone, and sousaphone, the 11-piece band opened with the psychedelic “Viola Lee Blues,” launching into an outstanding improvisation that peaked with a rousing trombone solo and kicked the crowd into high gear, where they would remain for the next hour and a half of music. The “Viola Lee” jam featured heavy teases of “The Other One” by drummer Alex Koford before returning to the song’s lyrical section and then, perfectly transitioning into the full performance of “The Other One.”*

During a rocking cover of the Rolling Stone’s “Monkey Man,” PJHB jokingly walked through and around the band to gather at the front of the stage and truly make their presence felt, before returning to their spot in the back corner for the Bob Weir classic, “Throwing Stones,” which almost had to be played given the current state of politics and the looming shadow of the U.S. Capitol, less than a mile away. Then, something strange happened.

Phil and his band took off their instruments and walked backstage, as an upright bass was brought on, along with a new drummer and a singer, and PJHB was left on stage alone. Weird spot for an opener, huh? Many in the crowd made their way to the exits, a terrible mistake as PJHB brought New Orleans to Washington for the next 15 minutes. The band would play two songs of high energy NOLA jazz and funk for a thinned out, dancing crowd before relinquishing the stage to Phil & Friends.

Expecting a quick encore as the clock closed in on 11 o’clock, fans were ecstatic when Phil and his band played the iconic opening notes of “Lady With A Fan.” As delighted as the crowd was thinking the band would close out the night with “Terrapin Station,” they were blown away as it continued into a full, 35-minute “Terrapin Suite.” As if that wasn’t enough, the show would go on to close with “I Know You Rider.” The adrenaline kept flowing for both the crowd and the band as they returned for their encore, playing an uptempo, anthemic rendition of “Ripple,” befitting the name of the venue and sending fans home smile, smile, smiling!

The live music scene in our nation’s capital feels forever changed by the presence of the Anthem, and this show was distinctly special for DC’s Dead Heads as Phil Lesh and his Terrapin Family Band filled the immaculate concert hall with the music of the Grateful Dead for the first time.

Thanks to Archive taper Alex Leary, a great recording of the full show can be found here:

Watch the beautiful version of “They Love Each Other” via Tim Libera below.