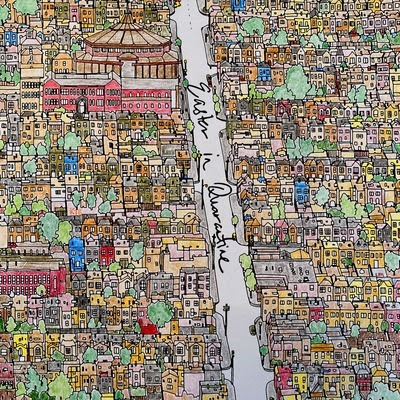 There’s no question that COVID-19 is causing a widespread pandemic and resulting in people taking extreme actions of isolating and quarantining in order to help stop the spread of the virus.

Not unlike the rest of the country and the world, Umphrey’s McGee have found themselves with an empty-for-now itinerary and, in isolation, the strange daily balance of making sense of it all and making use of the extra time. Today, the band released a new surprise single called “Easter In Quarantine” that was penned and recorded by Jake Cinninger and Brendan Bayliss, mixed, and mastered in the course of just over two weeks. Jake also played saxophone on the track as well.

“Gazing out the window on a chilly, gray day and what lands in my inbox but an unknown track titled ‘Easter in Quarantine,’” said Umphrey’s manager and the man behind this single’s artwork, Kevin Browning in a statement released by the band. “Setting down my coffee, I picked up my headphones and hit play on Jake’s latest delivery. The heartbeat of the kick drum and somber piano melody immediately gave me chills. Sparse and emotive, it perfectly captured the mood that morning.”

“Easter In Quarantine” can be streamed and purchased here.