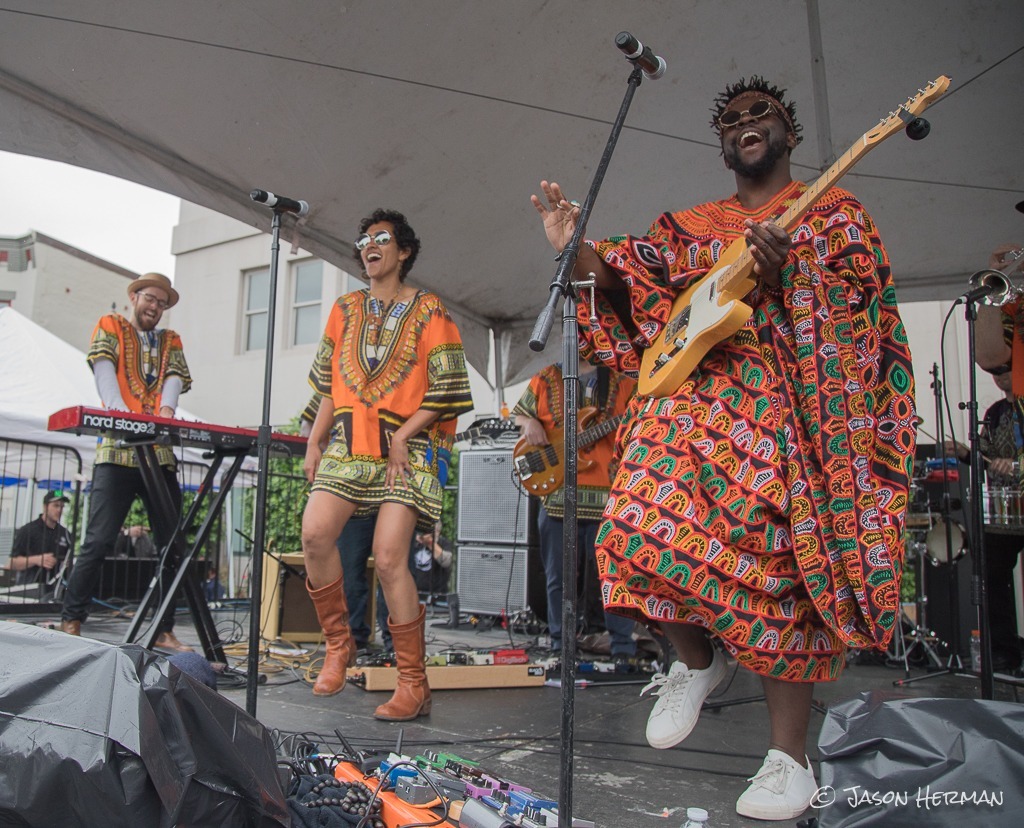 The U street corridor of Washington, D.C. is laced with musical history that runs deep, from Louis Armstrong playing on January 30, 1942, at the President’s Birthday Ball in honor of FDR’s 60th, at U Street’s Lincoln Colonnade, to notable stops from Billie Holiday, Otis Redding, Aretha Franklin and James Brown at the original Howard Theater. Washington, D.C. also experienced a musical renaissance through the origin of Go-Go music, the only genre to ever originate from our nation’s capitol. The architect and godfather of Go-Go is Washington, D.C.’s own Chuck Brown, who together with Marvin Gaye, helped shine a global spotlight on Washington, D.C. through music while creating a vibrant and pulsating culture around live music.

Today the same sense of organic culture and community can be found through D.C.’s Funk Parade, a unique celebration of music that commands every nook and cranny of the U street corridor and attracts over 70,000 people to share in the festivities. One of the most exciting local bands to come up the ranks in D.C. is the funk and soul outfit AZTEC SUN. Usually an eight-piece band, with three vocalists and a full horn section in their own regard, AZTEC SUN was joined by members of DuPont Brass, Andrew Toy (Drummer) from 7DrumCity on percussion and Graham Robertson on baritone sax.

On May 6th, AZTEC SUN faced the elements and took the stage adjacent to the African-American Civil War Memorial on U street. The band constructed a pensive setlist which featured many of their beloved originals as well as some choice covers and teases. AZTEC SUN wasted no time, opening up with a relatively new number “In The Name Of Everyone,” which immediately locked the crowd in to their soulful groove. The inclement weather didn’t stop the crowd from gathering as the numbers significantly started to grow now that the band was locked in.

“King Kong” surfaced next and featured Ryan “Catch” Sarafolean coming out from behind his kit of keys to act as a hype man at the skirt of the stage. The crowd was pumped up with energy gyrating back and forth. Keeping the momentum in full swing, AZTEC SUN stepped into “Get Up & Jump Around,” another one of their originals that takes a few pages out of Chuck Brown’s book, especially by invigorating a nice call-and-release back and forth banter with the crowd. Stephane Detchou is a natural leader and an incredible front man. His energy and ability to command a crowd on stage is unparalleled and this is one of his best songs to flex those characteristics.

“Set You Free” filled the slot next, which is one of the most celebrated songs off the band’s debut EP also titled Set You Free. It wouldn’t be right if AZTEC SUN didn’t showcase their range and fearlessness by taking a risk and covering an artist in front of a crowd of this magnitude, and they hit it out of the park with Childish Gambino’s “Redbone” off his most recent record Awaken, My Love! showcasing Steph’s incredible voice.

Another new track called “Go Be Do” surfaced next before one of the band’s staples “Voodoo Love.” The latter found plenty of room to improvise and featured a G0-Go Swing tribute to Chuck Brown. The inspirational number “Revolution” acted as a perfect song to embody the current political darkness in D.C. with the band keeping a steady pulse as Steph chants “the people will rise up, the people will rise up.” subsequently the actual parade was starting behind the large crowd and the band didn’t get time to play “Pa Ra Ra” which was etched on their setlist. The show was an incredible representation of the next wave of talent to rise out of Washington, D.C. The best is surely yet to come for this incredibly special band.

Check out a full gallery below from Jason Herman