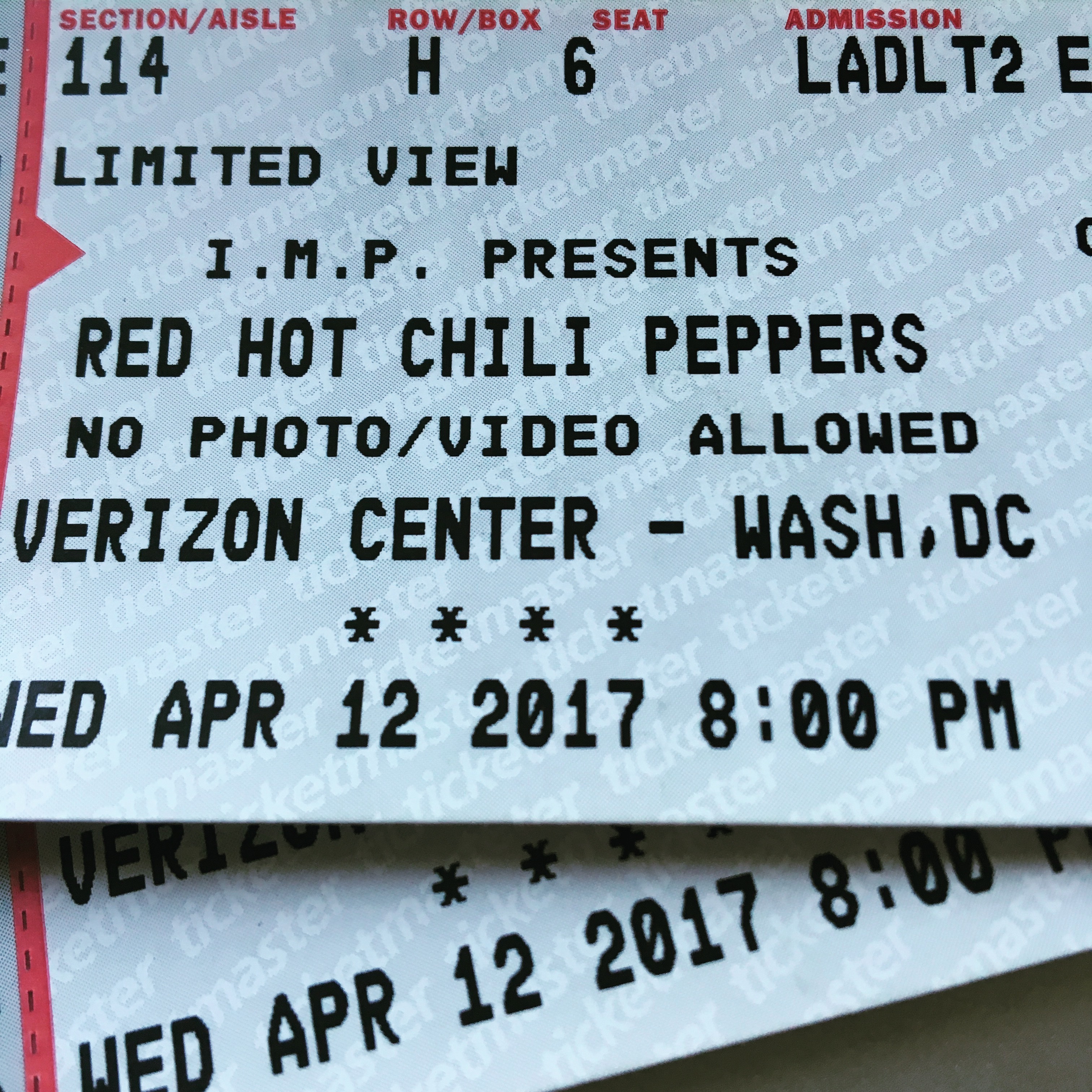 “Thank you so much. We’re so grateful to have the opportunity to play for you tonight,” said Flea as he addressed the sold out crowd in the Verizon Center moments before “By The Way” closed out the Red Hot Chili Peppers‘ 90-minute set. “I remember going to Orpheum Records and going to find all the old Funkadelic records I couldn’t find in 1985. We came here and we played at the 9:30 Club, and we played at the Bayou. A bunch of fucking places. It’s such a beautiful, poignant feeling to come back to so much kindness, hospitality, and warmth. Peace and love to everybody. Thank you, so much love, thank you.”

This heartfelt moment from the iconic bass player was just one of many notable incidents of crowd interaction with the band and the audience during the Red Hot Chili Peppers’ 20th-ever performance in D.C. Pushing into their impressive 34-year-long career, the Red Hot Chili Peppers continue to reinvent themselves in the live atmosphere and remain a true live act. It’s more than just a concert, there’s an entire live show to be seen. Anthony and Josh were jumping off stage equipment, Flea was doing hand stands and even Chad had some stage banter. Together the band brought the same trademark energy they’ve always been known to bring since their days of playing the Whisky A Go Go in the ’80s.

On Wednesday, April 12, the Red Hot Chili Peppers returned to D.C. for the first time since 2012. Armed with a plethora of new material from their most recent studio album, The Getaway, the Peppers constructed an introspective set-list chalked full of their hits, ballads, deep cuts, and new material. The energy never plummeted as the music meandered throughout the evening. The band laid down their trademark funk and rock which kept the crowd engaged and interactive.

One of the most notable takeaways was not only how much Josh (Klinghoffer) has developed and matured as a talented guitar player, but also how well he’s cemented his role in the band. When Josh became a full-time member in 2009 he had to find his confidence in the lead guitar position. When he toured with the RHCP as a side man during the Stadium Archadium tour, he was still very much backing up the adept driving force of creativity, John Frusciante. Fast forward to present day and Klinghoffer has eight years of touring in the lead guitar position and two studio albums under his belt with the Red Hot Chili Peppers. The mid set block of “Dark Necessities” > “The Adventures Of Raindance Maggie” > “Jam” -> “Go Robot” featured Josh at his absolute best, as the guitar virtuoso wasn’t afraid to explore and stretch his original material well beyond its original measures.

Other highlights included rarities like “Charlie” and “Aeroplane” where the band was completely locked in, a gorgeous version of “Soul To Squeeze,” “Californiacation,” which was surprisingly the longest single song of the evening (clocking in at nearly eight minutes). The crowd favorite from the self-titled album featured a slow-build jam where Flea paid homage to D.C. by teasing Fugazi‘s “Sweet and Low” before Josh mysteriously fell into the opening notes of “Californication.” Reeling off the energy from the crowd, Flea lead the band into a quick cover of Funkadelic‘s “What Is Soul?” which featured Josh tactfully laying down on his wah pedal. As the music unfolded, so did the intensity of the band’s production.  One of the best parts of the band’s production was their incredible light show that consisted of ascending and descending LED tubes. The bright lights lit up the arena with an abundance of creatively designed shapes and themes – like a wave crashing or a 3D-cube floating over the audience. This new addition is unlike anything we’ve ever seen the Red Hot Chili Peppers experiment with. After a quick encore break, the band came back out and juxtaposed their new direction with their deeply bedded roots when they delivered the one-two punch of “Goodbye Angels” -> “Give It Away.” Together the band managed to tuck in another hat-tip to D.C.’s Fugazi with a tease of “Waiting Room” during “Give It Away.”

The Getaway tour seems to be going so well perhaps additional tour dates could surface in the Fall.”

“Give It Away” courtesy of Jim Powers

“Suck My Kiss & Soul to Squeeze” courtesy of Jim Powers