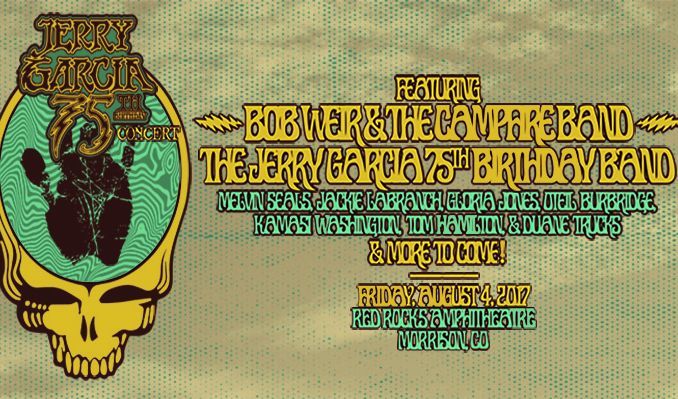 The 75th Jerry Garcia Birthday Celebration is slated to take place on Friday, August 4, 2017 at the Red Rocks Amphitheater in Denver, Colorado.

The Campfire Tour is a 2016 mini-tour put together by Weir, which has featured Aaron Dessner, Bryan Devendorf and Scott Devendorf of The National, along with Jon Shaw, Josh Kaufman and Steve Kimock. The all-star cast of Jerry Garcia Birthday Band will include Melvin Seals, Jackie LaBranch, and Gloria Jones of Jerry Garcia Band, as well as, Oteil Burbridge, Kamasi Washington, Tom Hamilton of Joe Russo’s Almost Dead, Duane Trucks of Widespread Panic and more.

The Jerry Garcia family has recently announced a string of concerts in addition to the Birthday Celebration, in Los Angeles, Brooklyn, Burlington and Nashville.

On August 1 in Los Angeles, at the Teragram Ballroom, Aquarium Drunkard and the Jerry Garcia Family will present Grateful Shred and Friends, including members of Circles Around The Sun, The Western Stars, Mapache, and more.

On August 1 in Brooklyn, at the Brooklyn Bowl, The Garcia Project will perform a full Jerry Garcia Band set list  from 1976-1995 and Andy Falco of the Infamous Stringdusters & Friends presenting a special performance of Garcia & Grisman’s The Pizza Tapes.

On August 1 in Burlington, the celebration will be at the Higher Ground Ballroom and feature an all-star cast of local musicians. The evening’s line-up and program have yet to be announced.

On August 2 in Nashville, Ain’t No Place I’d Rather Be will be held at the Basement East. Additional details and line-up will be announced soon.