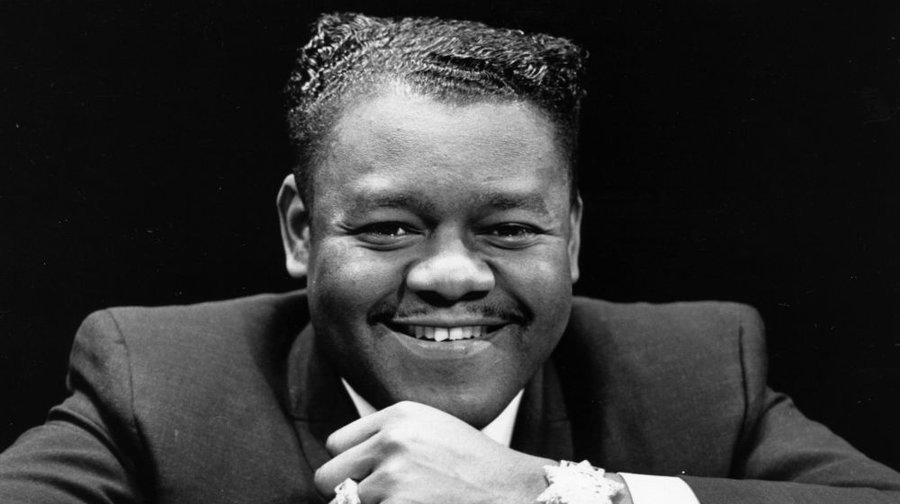 Antoine “Fats” Domino, a pioneer and a titan in the early development of rock and roll passed away of natutral causes yesterday at his home in Harvey, Louisiana. He was 89.

Domino was widely recognized for his distinctive triplet-based piano style, in which he hammered chords in groups of three in rollicking, melodic fashion and many of his hits were characterized by midtempo rhythms. Domino inspired many artists who would end up icons in the rock and roll genre, including John Lennon, Jimmy Page, Tom Petty, and Neil Young. In 1968, Paul McCartney wrote “Lady Madonna” with Fats in mind.

Fats was one of the biggest stars of rock and roll in the 1950s and one of the first R&B artists to gain popularity with white audiences. With the exception of Elvis Presley, nobody sold more records than Fats in the ’50s. Fats was present in the audience of 2,200 people at Elvis Presley’s first concert at the Las Vegas Hilton on July 31,1969. At a press conference after the show, when a journalist referred to Presley as “The King,” Presley gestured toward Domino, who was taking in the scene. “No,” Presley said, “that’s the real king of rock and roll.”

Some of his most notable songs were “Ain’t That a Shame,” which was his first crossover hit, “I’m Walkin’,” “I’m Ready,” “Valley of Tears,” “Walking to New Orleans” and “I Want to Walk You Home.” His version of “Blueberry Hill,” a song written in 1940, topped out at No. 2 on the Billboard charts and remains Domino’s highest-charting record.

As Hurricane Katrina approached New Orleans in August 2005, Domino chose to stay at home with his family, partly because his wife, Rosemary, was in poor health. His house was in an area that was heavily flooded and someone thought Domino was dead and spray-painted a message on his home, “RIP Fats. You will be missed”, which was shown in news photos. It was later reported that he was rescued and air-lifted via helicopter.

Domino remained a steadfast part of the New Orleans scene. He played a sold-out show at Tipitina’s nightclub in 2007 and appeared in an episode of the TV show Treme in 2012. He was inducted into the Rock and Roll Hall of Fame in 1986.
h/t CNN