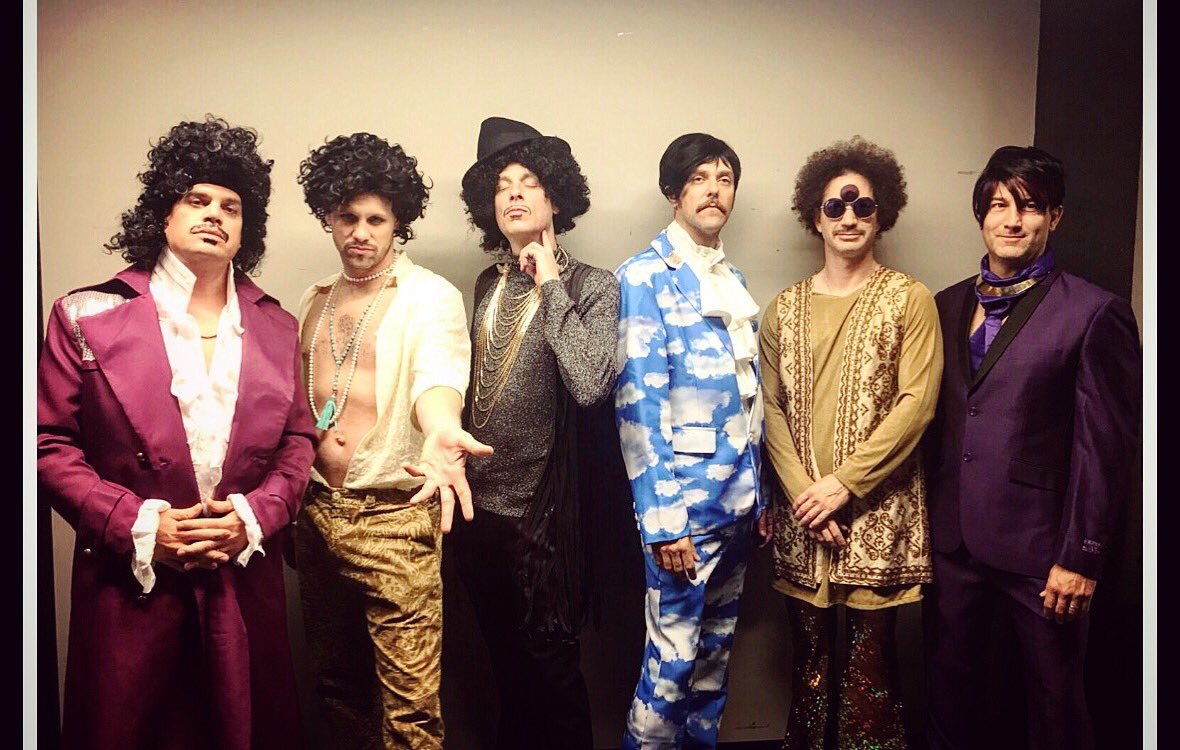 Legendary prog-rockers Umphrey’s McGee celebrated Halloween last night by closing out a two-night run at The Palace in St. Paul, Minnesota. Recently UM announced that they were stepping away from their Halloween tradition of mashing up songs and go with a “themed night” instead. While fans were no doubt excited to see what kind of themes the band could string together, there was still no doubt a level of disappointment as UM has really perfected the art of mashing songs together, so much so that they took it to the studio and cemented a handful of songs on Zonkey.

Last night the band saw a great opportunity to shine a light on Prince and debuted a handful of new covers originally scored by the The Purple One. Performing only 12 miles away from Prince’s birthplace Minnesota, each band member channeled different eras from Prince’s career and had their own unique costumes. During the opener, Brendan Bayliss stood under a spotlight and recited the opening monologue of Prince’s “Let’s Go Crazy.” The front man professed “dearly beloved, we are gathered here today, to get through this thing called life,” before finishing the rest of the intro over the organ fills from Joel Cummins.

UM incorparated plenty of choice originals in their first set inside of a “Bridgeless” sandwich including “Blue Echo,” “Rocker Part 2” and “The Linear.” After the band wrapped up the finishing poece of “Bridgeless” they closed the first set with another Prince debut for the band: “Raspberry Beret.”

“We are going to take a short break and make some pancakes.”#umphreys

Set two opened up with the third Prince debut (so far) of the evening with the 1979 smash “I Want To Be Your Lover” and featured Ahmed Galleb taking the lead vocals. Gallen, from Sinkane, worked the falsetto and did the number justice. UM wasted no time and dropped right into a thick and funky rhythmic groove of improvisation. The band showcased their impeccable ability to listen to each band member chime in and together they meandered through many beautiful musical parts unknown. Jake Cinninger took the lead first out of the gates before Joel chimed in with some gorgeous fills.

UM kept on the gas and played some of their beloved crowd-favorites like “Ocean Billy,” “Utopian Fir,” “Attachments,” and “Mulche’s Odyssey.” The band turned back to Prince and debuted “Little Red Corvette” as the second set closer. The band kept The Purple One’s theme in stride and debuted “1999” as an encore leaving the crowd more than satisfied. The show featured many different surprises and UM proved that they can still craft a well-constructed setlist without leaning on mash-ups around Halloween. the end result was a beautiful themed evening full of musical bliss.

[I Want To Be Your Lover]