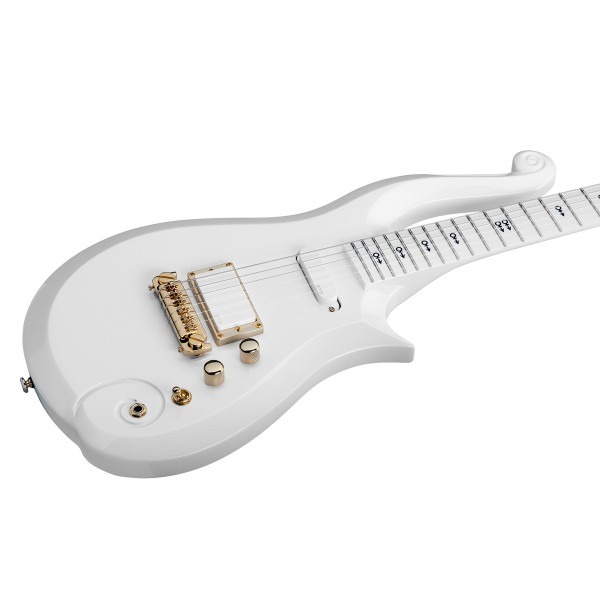 According to Prince’s website, Prince first came across the model for the Cloud Guitar while browsing in a guitar shop with his childhood friend and first bassist, André Cymone, in the late 1970s when Prince was at the very beginning of his solo career. The two musicians were intrigued by a custom bass guitar with hand-carved curves and swirls, and the way it resembled a classical instrument more than one you would see in the hands of a rock or funk musician. Prince purchased the bass for André to play, and it can be seen in the 1979 video for “Why You Wanna Treat Me So Bad?”

In 1983, when it came time for Prince to choose an instrument to play in his first film, Purple Rain, he brought the Cloud bass to a young Minneapolis luthier named Dave Rusan, who worked at Prince’s favorite local guitar shop, Knut Koupee Music. Recreating the bass as a prop to use in the film took months, and only four copies of the original white Cloud Guitar were made by Rusan — but his Cloud Guitars laid the groundwork for one of the most intriguing stage instruments of the 1980s.

Prince had the Cloud Guitar remade many times throughout his career in different colors and finishes, and the instrument re-emerged at several key points in his artistic evolution. Prince would call on the company Schecter to repair his Cloud Guitars and manufacture new replicas for his use, including a run that was sold to fans on Prince’s HitnRun Tour.

Every order ships in purple hard case with custom purple plush interior. All U.S. orders will also receive free domestic shipping. Guitars are expected to be ready for shipping in November of 2019.