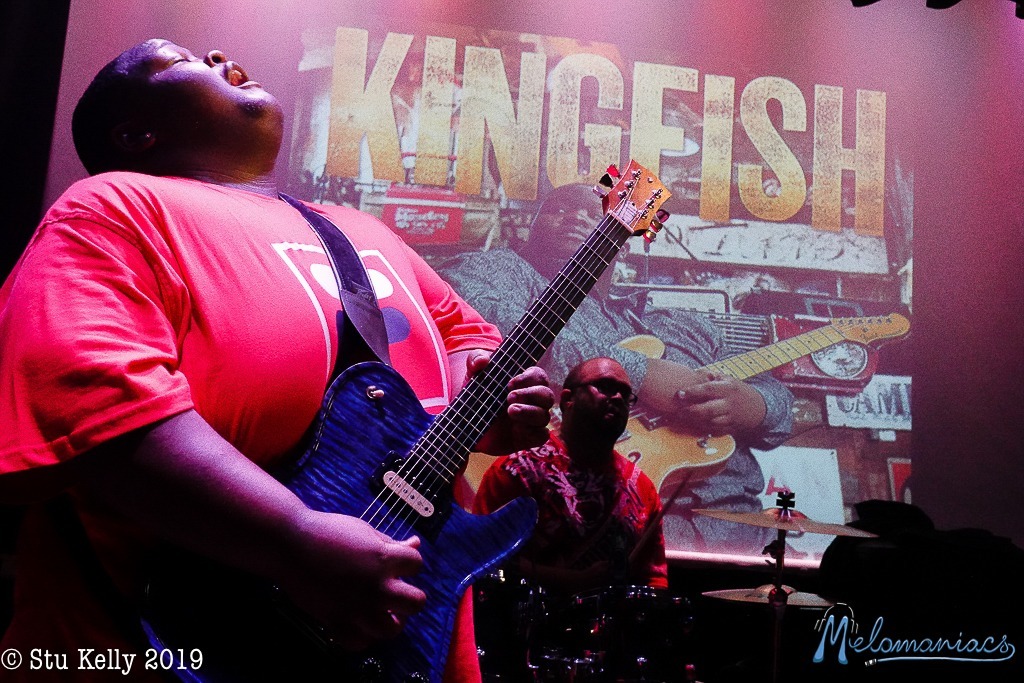 Kingfish made his live debut in Washington, D.C. last month when he graced H street with his presence at a relatively new venue called The Pie Shop to about 100 people. Born Christone Ingram, in Clarksdale, Mississippi, Kingfish is nothing short of a Blues prodigy. Having recently turned 20-years-old in January of this year, it seems like there’s nothing this young man can’t do with a guitar as he’s captivating audiences across the world.

On this particular night it was also the official release date for his debut studio album fittingly titled Kingfish, which was released on Alligator Records. The magnolia state native celebrated by putting together a breathtaking show to an intimate audience where he showcased his adept guitar solos, showmanship as a band leader and his well-rounded abilities as a singer-songwriter. Kingfish encompasses everything the Blues genre represents and his story telling of heartache, poverty, mourning and love speak volumes of wisdom well beyond his years.

Little did we know what was going to happen but Kingfish walked from the back of the audience and made his way to the stage at the beginning of his show. The prodigy was laying down a little solo and as he walked through the crowd and found the rest of his band on stage. Kingfish’s rhythm section was rounded out by Paul Rogers on bass and Chris Black on drums. Between the intimate, yet engaged crowd, Kingfish’s obvious prowess, and the energy in the room – it was clear we were going to witness something special.

The evening opened with “Before I’m Old” off the new album. A testament to living life to the fullest and never missing an opportunity when you’re “too young to lay down in that hole.” Kingfish tipped his hat to Blues legend Robert Johnson in one of the verses and wasted no time absolutely ripping up a piercing guitar solo that left the intimate crowd mesmerized. The sheer power behind Kingfish’s playing is astounding. The 20-year-old is gifted in ways I’ve rarely ever seen a young artist posses. Make no mistake about it: Kingfish is a living prodigy. Think the likes of Derek Trucks. The crowd pleasing guitar-solo was foreshadowing for what was yet to unfold.

“Fresh Out” surfaced next which was the first official single off the new album. The studio version features Blues legend Buddy Guy singing duet with Kingfish. This song poetically sums up one of the nation’s most frustrating obstacles as a country: poverty. Kingfish is wise beyond his years and his attract storytelling through his lyrics leaves so much to the imagination. There’s a lot of wisdom in his words, which can only be surpassed by his adept guitar playing.

Throughout the night, Kingfish would spend most of his time with his head cocked back tearing up his guitar solos. At times he would abandon the stage and walk around the crowd. The audience knew when to part like the red sea when Kingfish came through. It was remarkable watching Kingfish interact with members of the audience, in such close capacities, almost like he was having a full-blown conversation with each person he turned to without ever having to ay a word.

There were plenty of notable highlights throughout the show. None other than when Kingfish played a chilling rendition of Jimi Hendrix’s “Hey Joe.” This particular version was stretched well over 10 minutes long and featured multiple layers of improvisation. Keeping the momentum in full swing, Kingfish opted for another cover when he stepped into Muddy Waters’ “Catfish Blues.” This song was also jam packed with plenty of improvisation and even feature Kingfish ripping through a guitar solo using his teeth. This was just one of the many moments where the crowd was in complete and total awestruck of what they were witnessing.

Over the course of the show Kingfish blended his originals with other covers by the likes of Michael Burks and Johnny “Guitar” Wilson. When it was all said and done Kingfish left the stage in the exact same fashion he arrived. He hopped off stage in the middle of a solo and walked all the way to the back of the room, outside on the deck and posted up at his mercy table. All while shredding the guitar the entire time. This felt like a once-in-a-lifetime type show. Kingfish is clearly poised for greatness and there’s no reason to believe he won’t be playing arenas one day. The 20-year-old will no doubt continue to mature and grow as an artist and the best is yet to come. If you get a chance to see Kingfish live, do whatever it takes to make that happen as you will truly be in the presence of greatness.