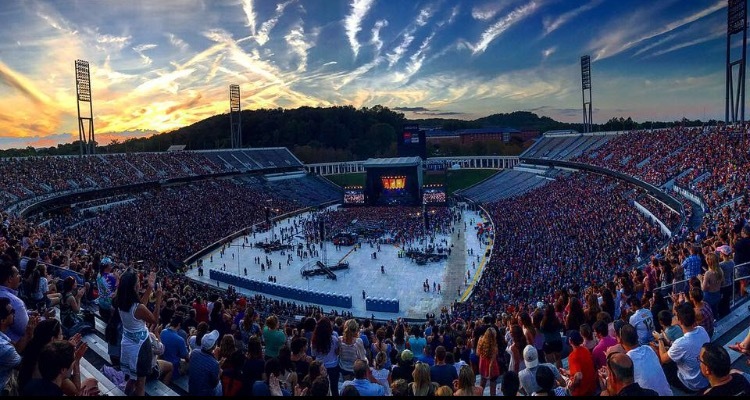 Dave Matthews Band welcomed a star-studded lineup filled with special guests for an evening of music and unity surrounding the recent tragic events that transpired in early August in Charlottesville. 50,000 fans filled Scott Stadium for the festivities. The talent was diverse and boasted names like Justin Timberlake, Pharrell, The Roots, Chris Stapleton, Brittney Howard, Ariana Grande, Cage The Elephant and surprise appearances from Stevie Wonder and Chris Martin and Jonny Buckland of Coldplay.

On August 12 a flood of alt-right neo Nazis flocked to the streets of Charlottesville in protest of the removals of confederate status. The alt-right was armed with machine guns and riot gear as they shouted racial slurs, touted Nazi flags and provoked violence at nearly every opportunity. The uprising of this hate group generated international attention in Charlottesville. The most tragic event occurred when a white supremacist rammed a car through a crowd of peaceful protesters that resulted in the death a young woman named Heather Hayer.

The day’s events sparked an outraged and cast a wide shadow on a city that was clearly bruised and suffering in these times of consistent uncertainty. The talent that came together last-minute was incredible. There were many different highlights over the course of the evening. One of the most surprising performances came when Justin Timberlake took the stage with a full band and lead the charge with an acoustic guitar. Timberlake played his hits like ““Can’t Stop the Feeling,” “Cry Me a River,” “Sexyback” and as well as a stirring rendition “Mirrors.” However, Timberlake really showcased his raw talent with a cover of Sam Cooke’s Civil Rights Movement classic “A Change Is Gonna Come.”

The Roots delivered a soulful set full of many of the event’s stars. Brittany Howard of the Alabama Shakes took the stage with The Roots acting as a house band and flexed her vocal prowess on the Temptations’ “Ball of Confusion (That’s What the World Is Today)” and Curtis Mayfield’s “Move On Up.” Virgina native Pharrell also joined The Roots for some of his most notable number like “Get Lucky,” “Happy,” and “Blurred Lines.”

The most notable collaboration came when Stevie Wonder unexpectedly crashed Dave Matthews Band’s set and played three songs, including a cover of John Lennon’s “Imagine” and his own originals “Love’s in Need of Love Today” and “Superstition.” This was the first time the two artists had ever performed together and Matthews at one point told the crowd they first met backstage.

At one point Wonder took Matthews’ hand and the two kneeled together. Wonder spoke for about five minutes with emotion about how important this was for him and for people to come together. “Now I take a knee for America,” he said before both Wonder and Matthews got on their knees. “I love you all,” Wonder said. “I’ve given most of my life showing you how much I love you and I’ll never stop.”

Watch the incredible collaboration of “Superstition” below.