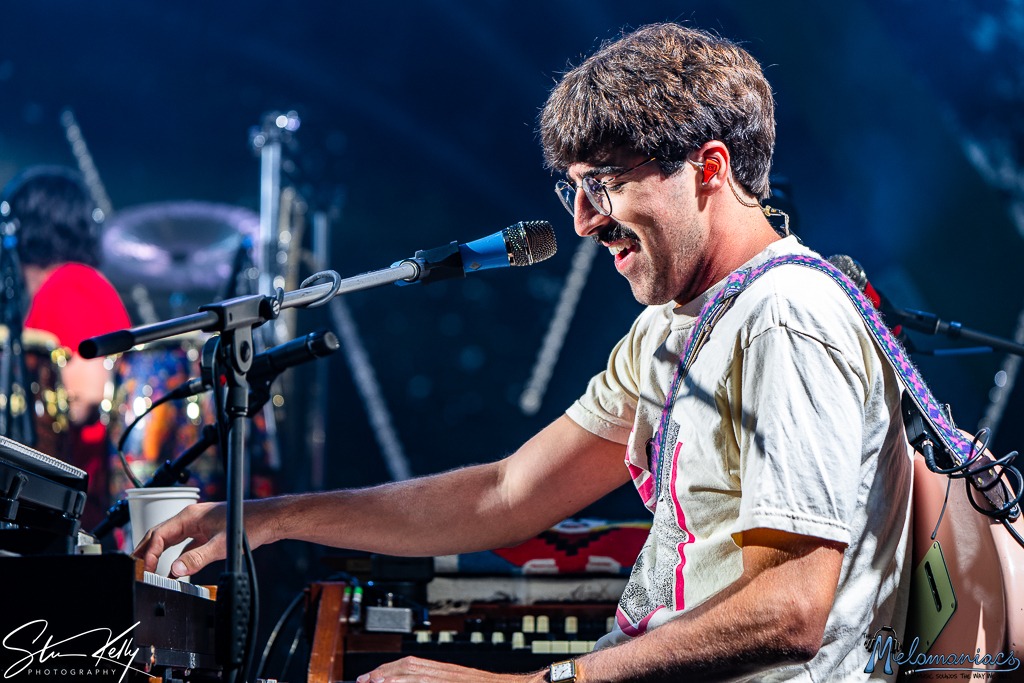 Goose is undoubtedly in a fascinating place right now in their career. Recently they sold out the iconic Radio City Music Hall in New York City where Trey Anastasio shared the stage with them for the first time. Earlier this week they announced a joint winter tour with Big Red which will take them up and down the east coast. Anastasio gracing the stage with Goose meant many different things to the masses. Was the proverbial “torch” poised to one day be passed, almost like a rightful successor was publicly declared? Goose’s momentum is driven by a series of consistent milestones of personal achievements, all of which culminated with one of the most well-respected guitar players in the jam band community standing on their stage.

When Goose descended upon The Chrysalis on the grounds of Merriweather Post Pavilion, the metaphor for transformation couldn’t have been more accurate. The Chrysalis is named after a quiescent insect pupa, especially of a butterfly or moth. The shift from egg to caterpillar to chrysalis and, finally, adult. The band took full advantage of the symbolism by opening up with “Butterflies.”

These two nights at The Chrysalis commenced the second leg of their Dripfield tour, where they’ll make their way out west and add another iconic debut at a renowned venue when they play Red Rocks Amphitheater. These two nights at The Chrysalis were the start of a new transformation. It didn’t take long for a random serendipitous moment of beauty to shine over the evening. Well before the music even started, a flying V formation of Geese flew over the venue. The symbolism of the flying V, working together in unison, was almost foreshadowing for the fearless musical exploration the band would settle into over the next two nights.

There were many different highlights from the first night of music but the moment of the evening came through a 36-minute juggernaut of a jam inside “All I Need.” The band took this version for a walk with meandering twists and turns which was the clear fan favorite. Other notable numbers included The Who’s “My Generation,” “Creatures, Otis Day & The Knights‘ “Shama Lama Ding Dong” and a gorgeous version of “Tumble” in the encore slot.

On Saturday the band came out rejuvenated especially since it wasn’t a travel day before their show. Peter Anspach lead the quintet through his original “Elizabeth” before finding their way into “Atlas Dogs” and eventually a rousing version of “Echo of a Rose.” The tight rhythm section led by Ben Atkind, Trevor Weeks and Jeff Arevalo created the perfect foundation for Rick Mitarotonda to build upon patiently. “Yeti” surfaced next which injected a wave of energy throughout the crowd.

The musical highlight of the weekend came when the band returned for their second set on Saturday. Even the band couldn’t have predicted what was about to unfold. The upbeat, danceable, stop-/go-driven number “Earthling or Alien?” always serves as a launching pad for adept improvisation and fearless exploration into musical parts unknown. However, this particular version pushed the band to new limits and to new heights. Clocking in at just over 25 minutes, this version was action-packed with improvisation inspired by each band member.

The flying V analogy certainly applies here as the band was in complete unison and it felt like not a second was wasted. While maintaining complete control at the end of the song, the band moved into “So Ready” perfectly without missing a beat. The two-song punch of “Earthling or Alien?” -> “So Ready” is proof of why fans keep flocking to this band and coming back time and time again.

Other notable highlights included another nod to the metaphorical transition in “Travelers,” Pat Benetar‘s “Love Is A Battlefield” and a stellar version of “White Lights” in the encore slot, where lighting designer Andrew Goedde lit up the forest with every bright white light in his rig. Goose tour continued on Tuesday in Colorado with two nights at Dillon Amphitheater before their debut performance at Red Rocks tonight. Check out the band’s upcoming tour and ticketing information here.

Set 1: Butterflies, Butter Rum, Lead The Way, The Whales, My Generation (The Who), Jive I

Set 2: Earthling or Alien?, So Ready, Travelers > Love Is A Battlefield (Pat Benatar), The Empress Of Organos