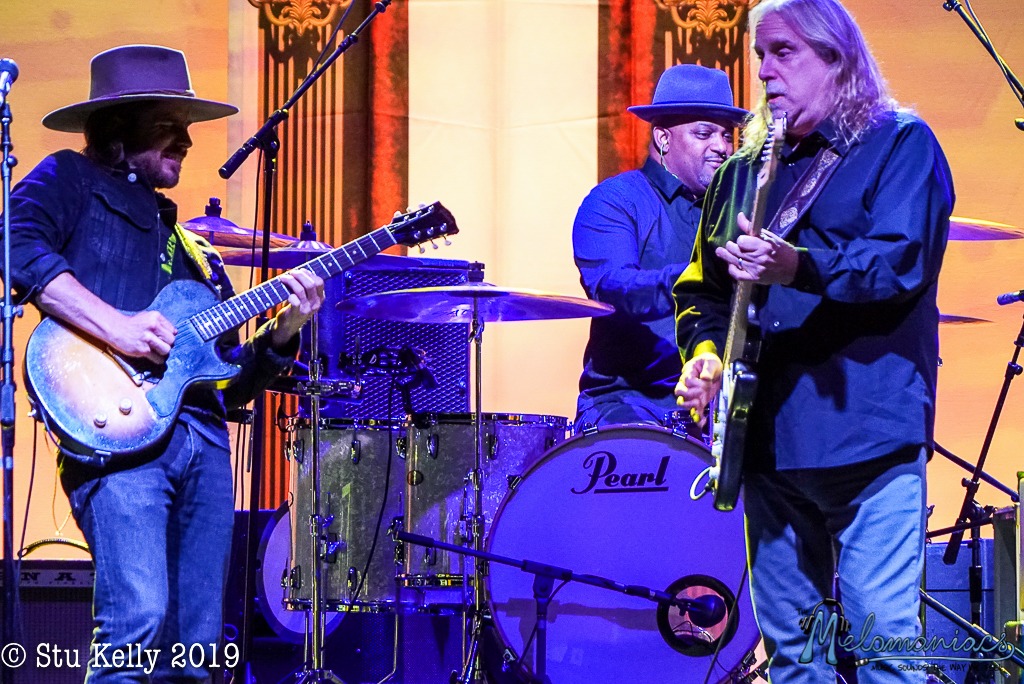 The Last Waltz ensemble descended upon the MGM Theater at the National Harbor last night in celebration of one of the most iconic live shows ever performed. The all-star band featured Warren Haynes, John Medeski, Lukas Nelson, Jamey Johnson, Don Was, and Terence Higgins as the core band for the evening. Dave Malone of The Radiators, legendary New Orleans percussionist Cyril Neville, acclaimed guitarist Bob Margolin and Mark Mullins & The Levee Horns also made appearances at different points during the show.

The evening consisted of a stunning tribute to the original Last Waltz concert, which was The Band’s final performance as a group on Thanksgiving Day, in 1976, in San Francisco. The ensemble paid tribute to Neil Young, Bob Dylan, Dr. John and Muddy Waters as expected. One of the evening’s surprises came early when a cover of Ray Charles’ “Georgia (On My Mind)” surfaced early in the first set. Jamey Johnson sang this song beautifully and the rest of the band was fully locked in.

The 2019 tour features multiple band members carrying lead vocal responsibilities and a wide-range horn section to fully encapsulate the original sound. The show opened up with Jamey Johnson taking the lead on “Up On Cripple Creek,” the same opener as the original show. John Medeski channeled Garth Hudson as he flexed his range on his Hohner Clavinet D6 while the rest of the band kept a steady flow. Johnson has a beautiful voice that fits perfectly for covering The Band’s songs.

Lukas Nelson took the lead vocals for “The Shape I’m In” and carried the band through the number with passion and precision. Nelson’s vocal range sounded eerily similar to Richard Manuel’s original performance. Warren Haynes stepped up for a beautiful rendition of Rick Danko’s “Stage Fright”where it became clear just how special this show was going to be. Three songs in and the audience were treated to three different musicians adding their own vocal prowess to these iconic songs.

The first set closed with a bone chilling rendition of Levon Helm’s “The Night They Drove Ole Dixie Down,” which featured Nelson, Haynes, and Johnson all serving up their signature vocals. At the start of the second set something beautiful happened. John Medeski took the stage by himself and starting exploring some free-form avant-garde jazz on the keys. The opening notes caused people in the lobby to abandon the lines for the bar and hurry back to their seats, anxiously trying to avoid missing any of the music that was about to unfold. As Medeski took charge the rest of the band joined him on stage before Medeski patiently stepped into the opening notes of “Chest Fever.”

The second set was full of highlights including “Life Is A Carnival,” “Rag Mama Rag,” “The Weight” as well as a pair Bob Dylan staples “Forever Young” and “I Shall Be Released.” One of the especially beautiful covers came when the ensemble covered Neil Young’s “Helpless.” Before the song, Jamey Johnson introduced Lukas Nelson as “one of the baddest guitar players in the game,” an impromptu sentiment of endearment before the pair squared off on one of Neil Young’s most beloved ballads. Together the pair performed the duet perfectly before Warren took an extended solo. One of the biggest surprises of the evening, in addition to the Ray Charles cover, was a rare song Muddy Waters popularized called “Caledonia” which Muddy actually performed at the original concert, but it didn’t make it onto the Martin Scorsese concert film. This is an especially special song because it originally appeared on The Muddy Waters Woodstock Album that was produced by Levon Helm.

Before the encore Warren noted that the last time they toured in celebration of The Last Waltz the band had the late Dr. John with them. They further paid tribute to the New Orleans native by playing “Such A Night,” a song Dr. John shinned on during the original concert. “Don’t Do It” acted as the perfect closer to put an incredible evening of music to rest. Overall, this was nothing short of an incredibly beautiful performance that was overflowing with love, gratitude and emotion.