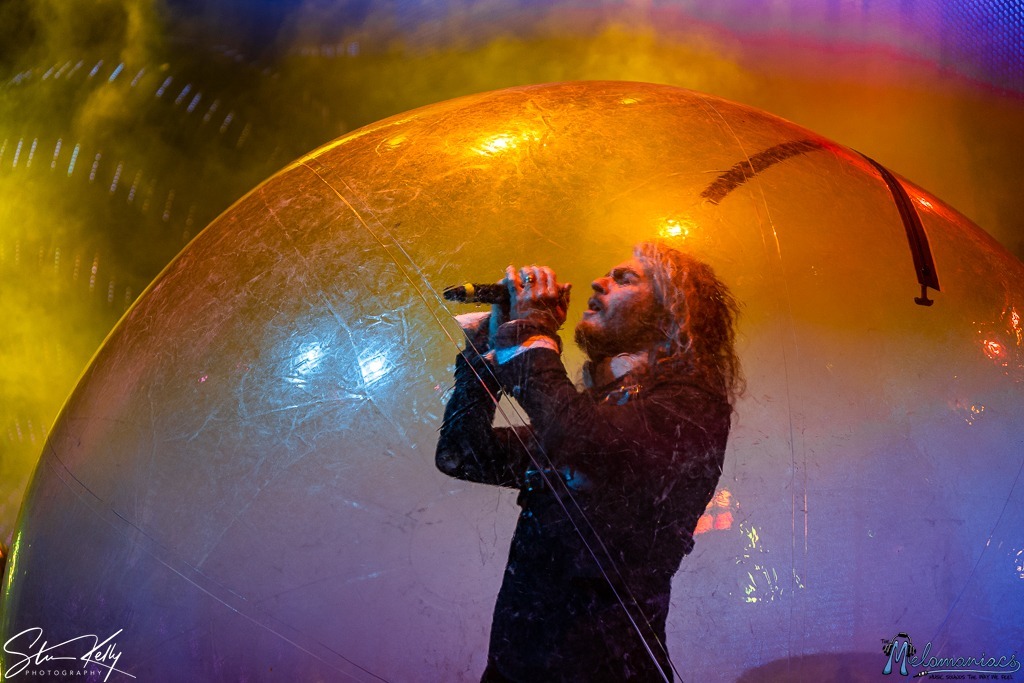 On Tuesday November 16, The Flaming Lips closed out their east coast winter tour with a spellbinding performance in Washinton, DC at The Anthem. The Oklahoma City natives are notorious for their over-the-top live performances complete with props, costumes, gadgets, toys, and a mesmerizing array of production. Behind the visually stimulating arsenal of affects The Flaming Lips break out each night, what’s most important is that they’re still a band who’s fearlessly exploring musical parts unknown and taking plenty of risks through their sound on stage. The band wrapped up this tour supporting their most recent studio release American Head, which came out in 2020.

Before the music officially started, Wayne Coyne took to the stage with a small mechanical toy bird. He told a quick story about how the song they were going to open up with was inspired by another small toy bird that he couldn’t find it the band’s storage. What made the bird he did have with him more special was that it actually flew threw the air. Coyne released the toy bird which did in fact fly over the audience a few times before the rest of the band found their instruments and their way into “My Cosmic Autumn.”

“Do You Realize??” surfaced next and was met with a rousing response from the crowd. At this point there was an inflatable rainbow behind the band, confetti cannons being launched into the crowd, and so much more organized chaos that only exists organically at a Flaming Lips Performance. “Assassins of Youth” off the new record bridged the gap between “Do You Realize??” and “Yoshimi Battles the Pink Robots.” The crowd was fully engulfed in the experience, only a few songs in but the band held the energy of the room firmly in the palms of their hands.

A deeply moving and introspective number found its way to light in “Flowers of Neptune 6” next. This song is mellow on the surface, but as you peel back the layers the lyrics tell a story with a melancholy undertone as the result of an acid trip. The song boats many different arrangements, who were originally penned by multi-instrumentalist Steven Drozd. Country music star Kayce Musgraves is also featured on the studio version providing backing vocals. Musgraves also reappears on the album for “God and the Policeman” as well.

“Assassination of the Sun” > “You Have To Be Joking” were both perfectly placed stepping-stones to “She Don’t Use Jelly,” which was easily one of the most rare songs we were blessed with that evening. The band was firing from all cylinders and clearly having a lot of fun on stage. That energy was infectious as it bounced back-and-forth from the stage to the audience. Other highlights included “Mother I’ve Taken LSD,” “Sunship Balloons” and “Dinosaurs on the Mountain.”

The Flaming Lips closed out their set with a stellar version of “Feeling Yourself Disintegrate” in its usual psychedelic fashion. After a quick encore break the band returned with a three-song punch in the encore slot of “Worm Mountain” > “All We Have Is Now” > “Race For The Prize,” which capped off an absolutely gorgeous show in DC and ended their tour with a statement. The band is currently enjoying some well-deserved time at home with their families before reuniting at the end of December with a two-nigh New Year’s Eve run at The Caverns in Pelham, TN.

The Flaming Lips are a swift reminder that no matter what it’s important to live in the moment. As they navigate their way through space and time on stage, true magic seems to unfold seamlessly. They don’t just put on a concert, they put on an entire performance. A spectacle of truth. Buying a ticket to see The Flaming Lips live is a spiritual journey and one that can take you to places you can only dream of if you can just let go and surrender to the unknown.