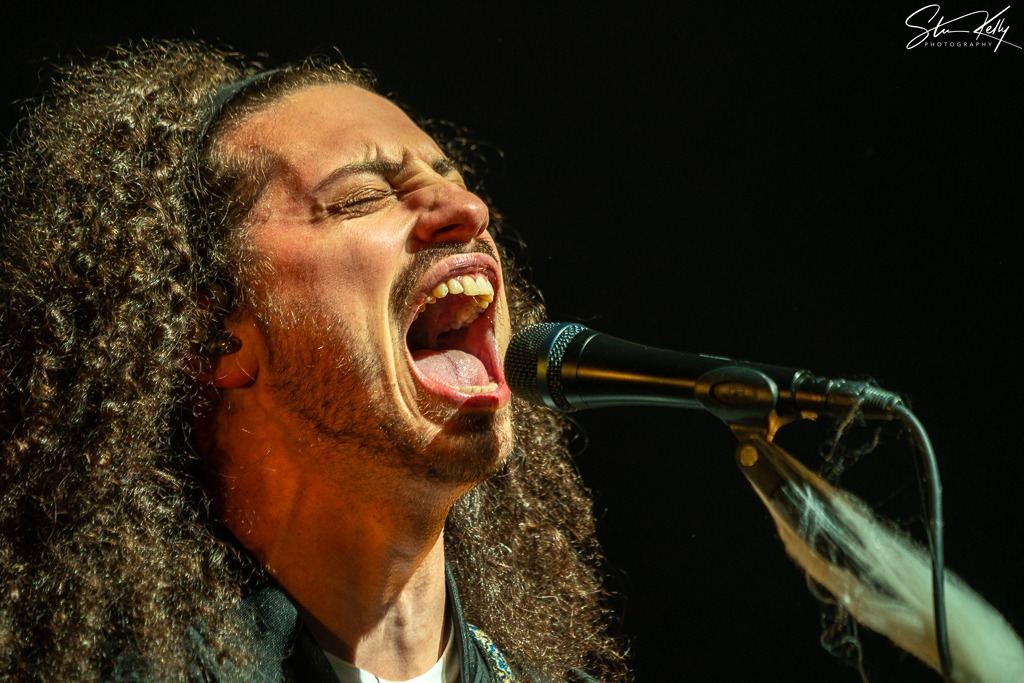 Baltimore natives Pigeons Playing Ping Pong kicked off the first night of a special three-night Halloween run last night in DC at The Anthem. PPPP are no strangers to putting their own unique spin on some classic covers. Fans rejoiced when it was announced that they were going to mashup Daft Punk and Pink Floyd for their Halloween run dubbed Daft Side of the Moon. Over the course of nearly three hours the band put together a well-crafted two sets of music and seamlessly intertwined their own originals with some incredible covers.

Before the band found their instruments, they lined up at the skirt of the stage and showed off their matching “Daft Side” tracksuits. Underneath the zipped up sweatshirts the band all wore the same shirts with the logo of a pigeon breaking through a wall with the Dark Side of the Moon prism rainbow behind it. On stage left and stage right there were also two large plywood pigeons in the shape of the rock structures from Pink Floyd’s Division Bell album artwork. It was clear the band was having a lot of fun with this theme. From the stage decor, the matching uniforms, and the abundance of rehearsal it must have taken to string this show together it was clear they spared no expense in making this a memorable night for the fans.

The first set kicked off with their original “Henrietta” which kicked the crowd into a frenzy. The band wasted no time tipping their hat to the theme of the evening with a special “Three Pigs Have A Cigar” (“Pigs (Three Different Ones)” / “Have A Cigar” mashup) complete with an “Echoes” tease. At this moment all bets were off and it was clear this was going to be an incredibly special evening.

Other highlights in the first set included the first time the band had ever played Daft Punk’s “One More Time” and Pink Floyd’s “Goodbye Blue Sky” which was tucked away inside of a “Skipjack” sandwich. A monstrous version of Pink Floyd’s “Run Like Hell” found way into the band’s original number “Porcupine,” which also featured a tease of Pink Floyd’s “Another Brick In The Wall,” to close out the first set.

After a quick set break the band returned rejuvenated and greeted the crowd at the skirt of the stage before finding their way to their respected instruments. Greg took to the microphone and highlighted the band recently put out a new studio single titled “Indiglo” which also featured Animal Liberation Orchestra‘s Zach Gill. “We’re going to play it for you now,” added Greg. The new song was well received by the crowd and the band took that energy in stride by dropping into one of their most beloved numbers “F.U.”

The second set also featured a resounding cover of Pink Floyd’s “Shine On You Crazy Diamond” which the band put extra emphasis on. This was easily one of the highlights of the entire show and was well worth the price of admission alone. Weaving in and out of songs PPPP closed out the second set with a meandering “Sunny Day” > “Comfortably Numb” > “Something About Us” > “Sunny Day, Feelin’ Fine” > “Young Lust” > “Feelin’ Fine.” After a quick encore break the band returned for “Schwanthem” > “Harder, Better, Faster, Stronger” > “Schwanthem” in the encore slot capping off an incredible night of live music. Dub Side of the Moon continues with stops in Pittsburg, PA and Columbus, OH.

Setlist via the band

Notes:
“Daft Side of the Moon” Halloween Night 1
*First time played
^ Pigs (Three Different Ones) / Have A Cigar* mashup; Echoes tease
” Instrumental
% w/ Another Brick In The Wall tease