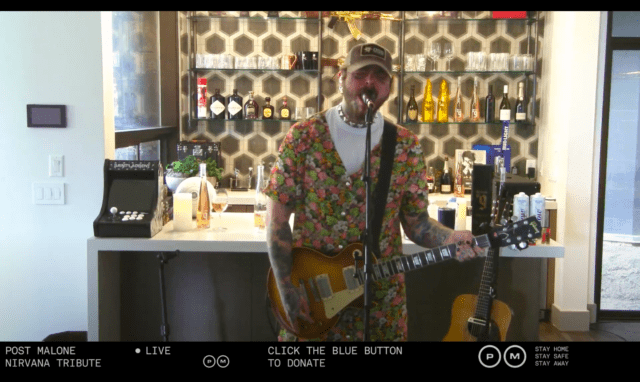 Earlier this week Post Malone quietly posted a teaser on his Instagram page announcing a special Nirvana tribute to benefit COVID-19 relief efforts scheduled for this Friday. Over 200,000 people tuned in to watch the unique Livestream yesterday where Post Malone and his band, which featured Blink 182’s Travis Barker on drums, raised over $2.6M for the United Nations Foundation’s COVID-19 Solidarity Response Fund. The performance itself was incredibly well-received. So much so that even Nirvana bassist Krist Novoselić tweeted out his approval.

I don’t think these fellows can play any better. They are on fire!!!!

The Livestream kicked on around 6 p.m. EST  to reveal a four-piece band in what looked like a basement bar hybrid jam room. “This is Brian Lee on the bass guitar, Nick Mac on guitar, and “Sir” Travis Barker on the tubs and skins,” said Malone. “We’re gonna play some Nirvana for you, and have some fun, and hopefully I don’t fuck up. Thank you to the gentlemen who wrote these beautiful songs.”

Together the band put a well-crafted set of 15 different songs spanning 80 minutes, including a near-complete performance of Nirvana’s classic 1991 release Nevermind; sans “Polly” and “Smells Like Teen Spirit.”

Malone also played three tracks off In Utero (his opener “Frances Farmer Will Have Her Revenge on Seattle,” “Very Ape” and “Heart-Shaped Box”) as well as a pair of Bleach cuts (“About a Girl” and “School”). During “Something In The Way” Brian Lee traded his bass guitar to Nick Mac and opted for his violin in what was a beautiful cover of the original track. Both Lee and Malone wore sundresses akin to what Kurt Cobain wore on stage and in interviews multiple times.