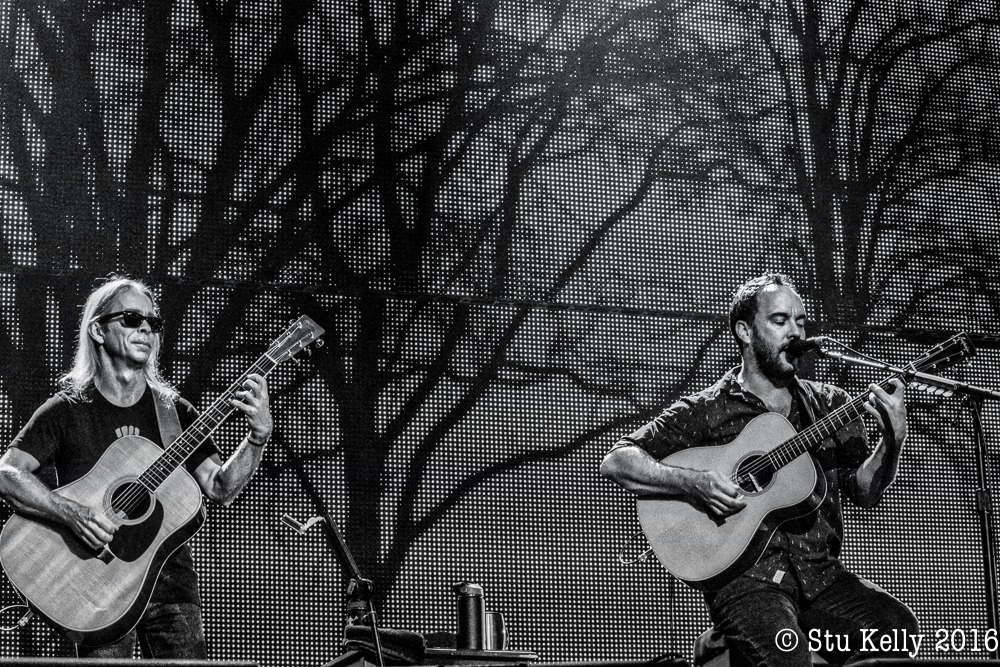 On Saturday June 3, Dave Matthews and Tim Reynolds played the second show of a two-night run at Philadelphia’s beloved Mann Center for the Performing Arts. While the previous night was packed full with a plethora of highlights like “The Song That Jane Likes,” “Best of What’s Around” and “Some Devil,” fans were likely skeptical the dynamic duo would continue at this pace and still bring the heat on the second night. The result of the second night silenced skeptics as Dave and Tim played one of their best shows so far during this summer tour.

2017 has been a busy year for Dave and Tim despite the fact the Dave Matthews Band is on hiatus. The duo made their debut at the Barcelo resort in Rivera Maya, Mexico this past February for three nights. One thing was clear when Dave and Tim embarked on a new endeavor in 2017; rarities were on the table. In the second night of their three-night run in Mexico, the duo liberated fan-favorite “Dodo” off Matthews’ solo record Some Devil, which was the first full version since December 11, 2010. The three night run was well celebrated by fans and certainly set a precedent for what was to be expected. After Mexico, Dave and Tim embarked on a 15-date Spring European tour that found the band debuting DMB songs in the acoustic format, including “Dreamgirl”in London.

Fast forward to their 2017 Summer Tour and Dave and Tim haven’t let off the gas. Their setlists continue to be well-crafted, career-spanning, in-depth interpretations on Dave’s lustrous career. It seems when Dave and Tim are performing together more of the deep cuts are on the table than ever before. Reynolds may have more creative input when drafting the setlists, or the two simply feel more comfortable in the intimate acoustic format. Whatever it is, it’s definitely working and the music reflects it.

Dave and Tim took the stage around 8 p.m., generously giving the hundreds of fans waiting outside time to get through security. As Dave and Tim took their positions, the opening notes of “Crush” echoed through the PA and was met with a wave of excitement from the crowd. “Crush” has become a staple for Dave and Tim’s acoustic sets, especially after their monumental version from Live at Radio City. After a beautiful version of “Crush” the pair dipped into DMB’s repertoire a debuted one of their most celebrated songs, “Pig,” in the acoustic setting. The crowd erupted in celebration and this was one of the most beautiful moments of the entire evening.

As the night continued to unfold, so did the intensity from the setlist. Many different hits surfaced over the course of the evening including “Spoon,” which was their first take on the song together since 2010, “Fool to Think,” “So Much To Say,” “Say Goodbye,” “Stay (Wasting Time),” “Minarets,” and “Granny.” Plenty of songs that fans were expecting to hear found their way into the rotation including “#41,” “Warehouse,” “Don’t Drink the Water,” and “Stay or Leave.” Dave and Tim also found time to switch gears and tip their hats to Procol Harum when they covered “A Whiter Shade of Pale,” which was last played by Dave and Tim back in November of 2011.

On this tour, it’s been common for Dave and Tim to treat the audience to a double encore. When the set closed with “Dancing Nancies” (which featured a lyric change shouting out the city of Philly), fans were eager to see how the encore slots would be filled. When Dave and Tim emerged they paid homage to the late LeRoi Moore with an acoustic debut of “Why I Am” from DMB’s  2009 release Big Whiskey And The GrooGrux King. “Two Step” closed out the first encore and was the only repeat over the two nights, however this version contained a beautiful, subtle tease of The Beatles’ “I Want You (She’s So Heavy)” from Tim Reynolds. The second encore contained a beautiful version of “Oh” which found its way into “Everyday,” which included the first verse and chorus of “#36.” As is tradition among DMB fans, the crowd sung the opening words and Dave looked on in full approval with the faintest smile. When it was all said and done the second night at the Mann will live on as one of the best Dave and Tim shows to date.

Watch a fan shot video of the acoustic debut of “Pig” below.