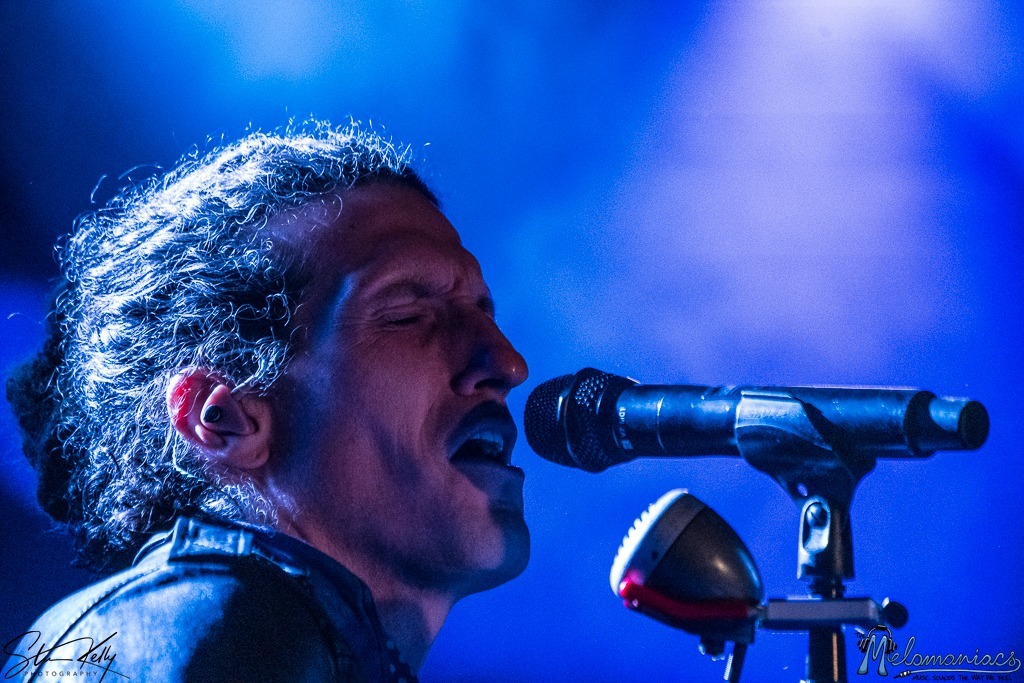 David Shaw recently wrapped up his debut solo tour with a spectacular performance at Washington, DC’s Union Stage. The recent run of shows was Shaw’s inaugural solo headlining tour in support of his debut self-titled solo album, which was released via his imprint Yokoko Records in partnership with C3 Records. Shaw built a stellar backing band to accompany him on the road including PJ Howard [drums],  Pete Murano [guitar], Andriu Yanovski [Keys], Noah Young [bass], and Chris Gelbuda [guitar] who also appeared on Shaw’s studio album.

The evening opened up with The Ries Brothers who brought every bit of energy an opener could. The Ries Brothers is a duo from Tampa, Florida, who blends rock, blues, funk, and reggae into a soulful-sophisticated sound. Older brother Charlie handles all of the vocal responsibilities, usually while behind the drum kit or playing bass on the keyboards, while younger brother Kevin keeps the crowd on their feet with his rhythm/ lead guitar chops.

The duo was a perfect fit to share a bill with David Shaw because like The Revivalists’ frontman, they also feed off the energy from the crowd and put it right back into their improvisation. Their set was so good the crowd was yearning for more after they played their final note of the evening and their tour. After the show, a large crowd gathered at their merch table for an informal meet-and-greet. The Ries Brothers have a special connection through music. The love they have for performing radiated bright throughout the evening.

After a quick changeover, Shaw and company took the stage just after 9 p.m. At this point, the venue was nearly full and the crowd was bursting with energy for the headliners. Shaw’s solo catalog has all of the traits one has come to appreciate from his mainstay band The Revivalists; a genuinely upbeat, danceable, well-crafted sound that packs a full punch as each layer begins to unfold.

To be blunt: David Shaw was born to be a performer. Someone destined for the spotlight. He thrives being center-stage and works his magic as a bandleader; not only navigating the show by using the crowd, but also creating space for whoever is composing his backing band to shine just as bright and get the most out of their respected instruments. It’s hard to find someone who understands that balance and responsibility as a lead singer. For Shaw, that sort of esoteric instinct comes effortlessly and naturally.

The band opened up with “Heavy Soul,” which was fitting because not only is it a crowd favorite but it was also the first single Shaw released in 2021 long before fans knew a full-length solo album would soon follow months later. Chris Gelbuta provided some funky rhythmic strumming patterns on his guitar as the crowd was fully entrenched in the thrills of the opener. The band went on to perform every single track from Shaw’s album and not a moment was wasted. Highlights included “So Far Gone,” “Promised Land,” “Shivers,” “Nobody Knows” and “I’ll Be Your Man.”

The band wrapped up the set with a rousing version of “Shaken” which only left the crowd yearning for more. Shaw returned to the stage by himself armed with his beloved C.F. Martin guitar, which he was recently reunited with earlier on this tour. This particular guitar was a gift to Shaw from his Aunt Linda and it underwent a serious repair recently and that’s saying something since it already has plenty of battle scars. A luthier had to completely reattach the back piece of wood after the guitar suffered catastrophic damage after a jam session between Shaw and his good friend/collaborator Maggie Keorner (check out the full story in our recent interview with Shaw here).

Nonetheless, both the guitar and Shaw sounded incredible. “Soulfight” ignited a massive sing-a-long between the crowd and Shaw, who was fully lost in the tender moment. The rest of the band returned with Kevin from The Ries Brothers for a three-song second encore securely putting the cap on an incredible night of music. Those lucky enough to see Shaw in small clubs of a few hundred people during this tour were treated to something truly unique and special. Keep an eye out for Shaw in 2022 with both The Revivalists and more solo performances.