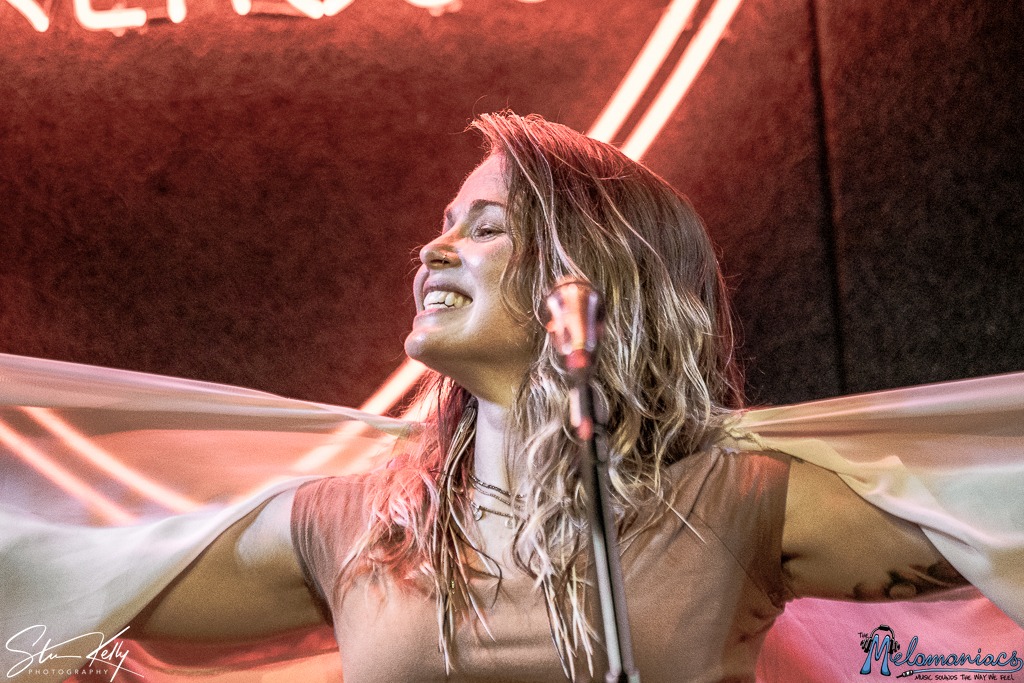 As an artist, it must be difficult to go on stage and find creative ways to captivate an audience night-over-night. One would assume it takes a sense of comfort, a sense of vulnerability, a sense of pride in one’s art, fearless pursuit of musical exploration, and an unapologetic sense of identity/expression. Whether an artist uses that avenue to tap into something special is contingent on a lot of different variables. It’s not often fans of the live music experience come across an artist with all of the traits listed above wrapped up in jaw-dropping talent combined with a prowess of a stage presence that almost seems effortless. For Hayley Jane, no matter what she does, she consistently proves time and time again why that’s exactly who she is as an artist. Her smile radiates from the stage in her element and it’s hard to not feel that same sense of happiness watching her perform.

Seeing Hayley Jane perform live is not just a show, it’s a full-on experience. It will take you to blistering heights of inspiration where it’s not uncommon for audience members to be awestruck in expression left with their eyes wide open and their mouths open. Whether Jane is performing to her die-hard fanbase, or a casual fan who stepped out for something unfamiliar, at the end of the night everyone seems to be unified under the claim that what they just witnessed was special. The power of a life-changing live musical experience can happen anywhere but it takes a true artist to be able to tap into something truly unique as a catalyst to something much larger than ourselves. When Hayley moved back to her home state of California she naturally wanted to drum up a band and start performing live. Hayley is one of those artists where it seems like she’s almost more comfortable on stage, with an audience, than she is in her own living room. It didn’t take long for her to take her band back east.

“The band formed during 2021 when things were very slow with the music still. I had just moved to town and was introduced to a few musicians and started putting a band together with a bunch of local guys. We were playing around town here and there. And one day I asked them ‘would you guys have any interest in taking this on the road back east?’ Needless to say, they were very into it,” said Hayley.

Hayley Jane graced the stage at Pearl Street Warehouse, in Washington, D.C., on October 5. Jane made a triumphant return to the east coast with her newly formed band that originated in California just over one year prior to this show. Hayley’s band consists of Donnie Dickman (keys), Jerad Fox (guitar), Michael Kobrinsky (drums), and Rob Melendez (bass). Together the band put together a well-crafted setlist that demonstrated their on-stage chemistry beautifully. This was an intimate gig but the energy in the room was ripe and palpable. For the majority of the show, Hayley focused on commanding the microphone and her natural theatrics on stage. She did however play a few songs with her acoustic guitar in the first set, which is always a treat to see.

Hayley is especially good at getting into a character on stage. Her performances are often coupled with a pantomime-like inspired movement. Growing up musical theater was a huge inspiration for Hayley. The idea of being “larger than life” comes out of her theatrics as she takes advantage of her space on stage, often shaking her hair in unison to the groove. Growing up Hayley watched a lot of Doris Day and Rock Hudson movies. Taking that show-tune foundation and injecting it with the psychedelic ’60s and ’70s Rock and Roll elements inspires a sensational result. Jane resembles a present-day Janis Joplin only she can also play an instrument.

Highlights from the first set included “What I Know,” “Madeline,” “Hey Mister” and a scorching cover of “Starman” by David Bowie. During the set break, the band came out from backstage and mingled with the crowd. The entire band made themselves available to talk to people in the audience which was really cool to see. On her way to the merch table, Hayley was stopped by a relatively new fan, who was clearly impressed by the first set and wanted to be sure she was the artist behind the song “Soul Shaken” which Hayley confirmed. After a meaningful exchange, Hayley made her way to the merch table where more people were waiting to talk to her. The woman left that interaction feeling rejuvenated as she pranced back to her friend group in awe of the interaction that just happened. At the merch table, Hayley’s best friend and former roommate Taraleigh Weathers was working the table and the crowd alike. A budding musician in her own right, Taraleigh has been there for Hayley throughout some of the most important moments in her life.

After a quick set break, the band returned to the stage to oblige the audience with more music. The second set was full of magical moments including “Eliza,” “Hurricane,” “Blue Planet,” “Make It Alright” and “Soul Shaken” which was subtly dedicated to the fan from set break. The band felt like they were running out of time so Hayley mentioned they had one more song. The sound engineer used a variety of hand signals to correct the band from the stage that they did in fact have plenty of time. After a few more numbers the band took a quick encore break and returned with Creedence Clearwater Revival‘s “Fortunate Son,” which Hayley dedicated to her father. After a rousing cheer of approval from the crowd, it didn’t take long for the “one more song” cries to come raining out from the audience. Basking in the overwhelming sense of joy from the crowd Hayley and her band returned to perform Three Dog Night‘s “Joy To The World.” When it was all said and done the crowd was left awestruck in full appreciation of what they just witnessed. It truly was a magical evening, as is every single time Hayley Jane takes the stage.