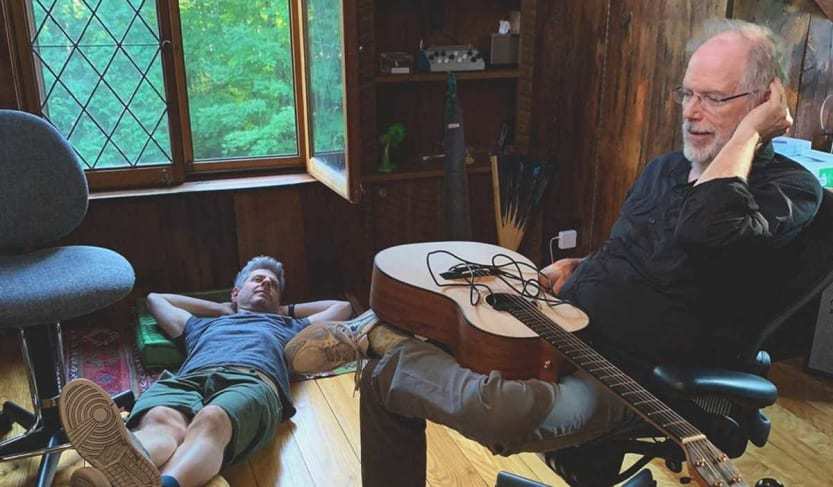 Mike Gordon and Leo Kottke will release their first collaborative studio album in 15 years on August 28 via Megaplum/ATO Records. The new album titled Noon was produced by Jared Slomoff and features songs from Mike and Leo’s respected catalog of originals. The duo is also known for reworking classing songs and putting their own twist on covers. In the past one of their most acclaimed covers is Aerosmith‘s “Sweet Emotion” from 2005’s Sixty Six Steps. Noon features covers of The Byrds’ “Eight Miles High” and Prince’s “Alphabet St.” Gordon’s Phish band mate, drummer Jon Fishman contributed to Noon. The album was recorded in New Orleans and various parts of Vermont, with music exchanged between the two artists by file, tape-sealed boombox, sheet music, and face-to-face.

Yesterday Mike posted a video of the sheet music for “Ants” and Leo working through some fingerpicking on his acoustic guitar. The duo also recently sat down with American Songwriter to talk about the album, their musical relationship and share a few tracks. The pair chose Kottke’s “Ants” and Gordon’s “I Am Random” as a teaser for the new album.

“Mike likes to write a lot of stuff and then throw out the shit that doesn’t hold up the next day,” Kottke told American Songwriter about the pair’s disparate writing styles. “He works that way. I can’t do that. I’m always just farting around and eventually stumbling over something. It rings your bell, you play it into the ground and that will make something else happen. We’re an odd couple. ‘Cause he’s a Pachinko machine and I’m paint drying. And it seems to meet somewhere in the middle.” Leo, for whom Noon marks his first studio album of any sort in since Sixty Six Steps, penned “Ants.”

Gordon wrote “I Am Random” with longtime collaborator Scott Murawski and debuted the song live during a solo show on March 19, 2019. “I am Mr. Random all the time,” Mike explained in the interview with American Songwriter. “I used to be Mr. Awkward. Now I’ve graduated to Mr. Random. I’m the one at the party who won’t say anything for a long time and then suddenly I’ll say something like, ‘Oh, well your swimming pool can’t get Xeroxed.’ And everybody will say, ‘What? I don’t know what that guy is talking about.’ My family has learned that as well, that I’m the one to come up with a non-sequitur. I have about five of them that I like to use at home. I like to say, ‘The moral of the story is’ and I cap it off at that. I was just thinking about being this random person, who always is either the black sheep or the life of the party, but is never quite understood.” Noon tracks “How Many People Are You” and “Peel” have also been played by Gordon’s projects in the past.

Noon is now available for pre-order here. The album will be available on a limited edition splatter vinyl, CD, or as a digital download.

Check out “Ants” and “I Am Random” below.

Announcing Noon: the new studio album from acoustic guitar pioneer Leo Kottke and Mike Gordon and their first in 15…