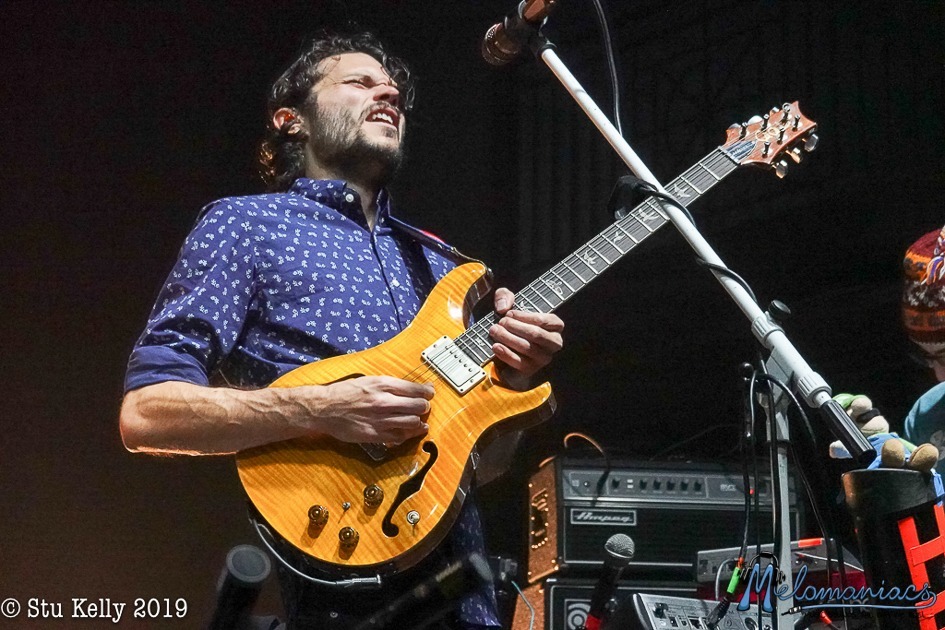 Goose graced one of the nation’s most famed venues this past Saturday when they descended upon the 9:30 Club in Washington, D.C. as the band is continuing their tour opening for SunSquabi. Fans lined up early outside the venue before doors opened, despite the cold weather, in order to get a spot on the rail for Goose’s set.

Hailing from Connecticut, the quartet has experienced a huge breakthrough in 2019 and it seems the band harnesses a unanimous sense of approval among jam band fans of all genres. Their sound transcends genres as it encapsulates elements of funk, rock, and progressive new-age jazz. Goose is Rick Mitarotonda (guitarist/lead vocals) Peter Anspach (guitar/keys/vocals) Trevor Weekz (bass) and Ben Atkind (drums).

It doesn’t take a particularly keen ear to hear how sharp they are as musicians, and one cohesive unit, but where Goose really excels among other jam bands is their vocal talent. Add that to the mix of piercing guitar solos, multi-instrumentalist band members, and a daring sense of adventure to explore musical parts unknown and you have a natural recipe for success.

Doors opened at 8 p.m. and the band took the stage promptly at 9 p.m. to a packed house of eagerly awaiting fans. During that hour before the music it was common to hear people comparing travel stories, monumental set lists from festival season and what songs they were hoping to hear tonight. It’s incredibly refreshing to see this band already have such a dedicated following of fans who are that passionate.

Goose took full advantage of their opening slot and wasted no time whiplashing the crowd into a dancing frenzy. Their set was injected full of energy and danceable upbeat layers of improvisation. The band soaked in the opportunity to play the 9:30 Club, especially Peter who was all smiles throughout the night and you could tell he was having a blast on stage.

2019 was no doubt a huge year for the band but 2020 is poised to be even bigger. Fans can expect new music next year and a fresh set of tour dates to keep the music on the road. Goose is catching on like a wild fire and they’re showing no signs of slowing down anytime soon. The future is certainly bright for this young and hungry band.