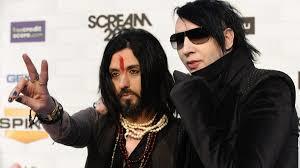 Marilyn Manson has decided to part ways with his longtime bassist and guitarist Twiggy Ramirez (born Jeordie White) after the musician was accused of rape and assult.

Twiggy’s departure from the band comes after his ex girlfriend Jessicka Addams, singer of the band Jack Off Jill, accused him of rape and abuse in an October 20th Facebook post. Addams detailed what she claims was a “tumultuous relationship” with White, which began in the early ’90s when she was 18.

I have decided to part ways with Jeordie White as a member of Marilyn Manson. He will be replaced for the upcoming tour. I wish him well.

Twiggy first left Marilyn Manson in 2003, but rejoined in 2008 to record the band’s seventh album The High End of Low. Manson’s next scheduled concert is a set at Ozzfest Meets Knotfest November 5th in Devore, California. A European tour in support of his new album, Heaven Upside Down, will follow with a North American leg scheduled for next year. It’s still unclear who will replace the bass player.