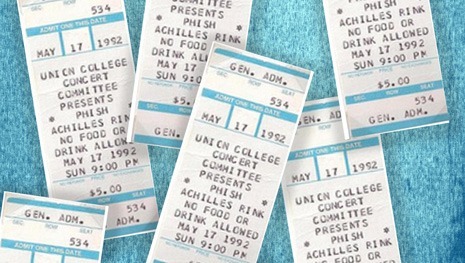 Phish have officially released their legendary show from May 17, 1992 in Schenectady, New York, which also happened to be Page’s birthday. The new release is available on mp3, lossless and HD files via LivePhish here.

In the Spring of ’92 Phish was making their way back to their hometown of Burlington, Vermont after a 53-show spring tour that hit 24 states and the District of Columbia with five shows in Colorado, six in California and seven in New York, according to LivePhish. This show was a prime example of how much Phish was becoming a mini phenomenon, as they relied heavily on word of mouth to fill the Achilles Rink, the Union College hockey arena, with 2,500 people at only a $5 ticket price. The show wasn’t publicized on the band’s official newsletter or hotline (yes, this was before the internet became the number one source for this information) and fans were plastering various cities on the tour with promo stickers depicting Nectar’s face from their upcoming new release, Picture Of Nectar.

The show is a chalked full of highlights including a stellar “Landlandy” > “Llama,” “Colonel Forbin’s Ascent” -> “Fly Famous Mockingbird” opening sequence, a fast-paced “Chalkdust Torture” that closed out the fist set. The second set opens with “The Curtain” which flows into one of the best versions of “Possum” be band has ever played to date. “Possum” clocks in at just under 14-minutes and features a plethora of Secret Language cues and teases of everything from “Rocky Mountain Way,” to “China Grove”, to “It’s Ice” and “Divided Sky.” Other highlights from the second set include the rare three-song punch of “All Things Reconsidered” > “Brother” > “Sanity,” before a quick “Cold As Ice” cover followed by Fishman taking the lead vocals on Syd Barret’s “Love You,” that was followed by a stand alone “Hold Your Head Up.”

The new release also features and eight-song filler selected from their tour-closing show the following night (5/18/92) at The Flynn Theatre in Burlington. This show is a great representation of a rapidly ascending band fresh off an extensive tour with a devoted, growing  fan base. This was still well before Jerry Garcia’s tragic death in 1995 where it became astronomically more rare to get a Phish ticket for $5.